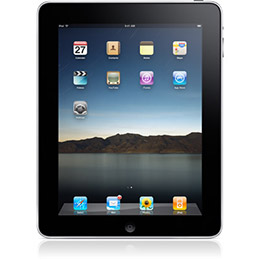 It’s I-Day. You can’t go anywhere on the web without reading about Apple’s new iPad following its launch in the US. Take a glance at Twitter’s #iPad stream — it’s receiving around 300 tweets a minute from eager buyers standing in queues outside Apple stores or unboxing their beloved gadget.

Although the iPad has a few notable omissions — no multi-tasking, no USB, no camera, no Flash plugin — the reviews have been universally gushing in their praise.

the iPad is so fast and light, the multitouch screen so bright and responsive, the software so easy to navigate, that it really does qualify as a new category of gadget

If people see it as a way to replace heavier, bulkier computers much of the time — for web surfing, email, social networking, video- and photo-viewing, gaming, music and even some light content creation — it could be a game-changer the way Apple’s iPhone has been.

The iPad is not so much about what you can do — browse, do email, play games, read e-books and more — but how you can do it. That’s where Apple is rewriting the rule book for mainstream computing. There is no mouse or physical keyboard. Everything is based on touch.

No one really needs an iPad, but it turns the web into what we wanted.

Apple’s iPad hype has already been a success and 250,000 people have pre-ordered the PC. Unfortunately, those of us outside the US will need to wait a month or two longer before we can examine the iPad for ourselves.

Tablet PCs have been around for many years, so I’m yet to be convinced it’s a transitional device that changes people’s perceptions of computing. However, I can understand the appeal — this could be the first tablet which offers a truly intuitive interface designed for touch-screens and web browsing. It could be a better alternative to a netbook for entertainment and lightweight computing tasks.

I’d really like to hear from anyone who’s got their hands on a new iPad. What were your first impressions? What did you think after a few hours? What will you use the device for? Is it a capable web browsing machine? Are the reviews correct?

Want Flash And MSOffice On The iPad?Toby Tremayne

Our Survey Could Win You an iPad 2™Ricky Onsman