Phoenix, as it was then known, was an experimental browser developed by Blake Ross, Dave Hyatt, Pierre Chanial and Joe Hewitt. The amusing version 1.0 (Pescadero) release page remains live today and you can even download the installation (extract and run — no user-friendly installers here). 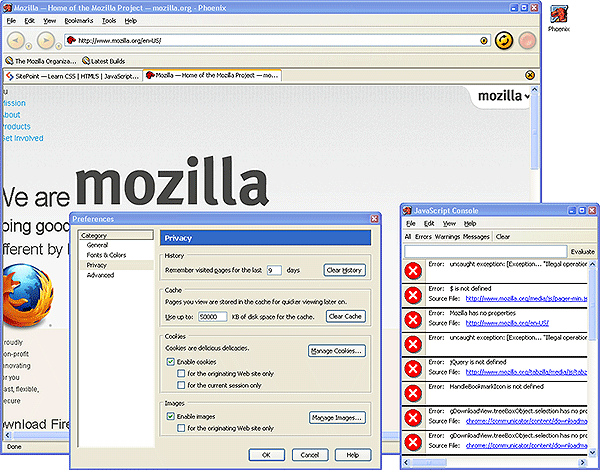 There have been a few obvious interface changes in the past decade, but features such as tabs, preferences and the JavaScript console remain recognizable.

In 2002, Internet Explorer 6.0 reigned supreme with a 90%+ market share. Microsoft’s business tactics may have been questionable, but IE had little competition:

Despite the hassle IE6 caused in later years, the browser’s success was largely deserved.

Phoenix Rises From the Ashes

Phoenix evolved because the developers believed Netscape’s commercial requirements and Mozilla’s scope creep compromised the browser’s future. They wrapped the Gecko rendering engine in a lightweight shell, removed unnecessary features and introduced the concept of add-ons.

If you think Firefox releases appear rapidly today, Phoenix 0.2 was released within one week. Version 0.3 appeared on October 16 2002, 0.4 on October 31 and 0.5 on December 7. The browser had started to gain momentum in the developer community. Like many, I had it installed although still used IE6 as my default.

Following trademark issues with Phoenix Technologies, the browser was renamed “Firebird” and version 0.6 appeared on May 16, 2003 for Windows, Mac and Linux. Versions 0.6.1 and 0.7 appeared in July and October 2003 respectively. These editions changed everything:

The Firebird name didn’t last long, particularly as it clashed with the open source Firebird database server. Following delays in the trademarking process, the browser was re-branded “Firefox” on February 10, 2004. Reactions were mixed — partly because it shared its name with the dire 1982 Clint Eastwood movie — but it stuck and Firefox 1.0 was launched on November 9, 2004.

Today, Firefox usage accounts for 23% of the browser market — down from its peak of 33% in November 2009. But, without Firefox, the web would not be the same. Would Google and Apple challenged Microsoft’s domination if it were not for Mozilla’s success? Would IE6 still have a stranglehold on the web? Even if you prefer another browser, that application may not have existed had Firefox failed.

Congratulations to Mozilla and the Firefox development team for reaching double-figures. I’m sure the browser will still be around in another ten years. Are you?