CAPTCHA has always been a controversial subject. Apart from the well-documented accessibility problems, there’s the simple irritation we all feel when we’re asked to perform a circus trick to prove we are a person — something we usually take for granted. The unfortunate fact is spammers aren’t going away any time soon, and many have the time, resources and inclination to exploit any angle they can find. We need good, original thinking in this area. 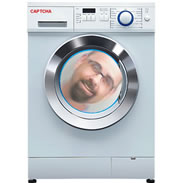 A white paper explains the idea in detail but the concept is simple enough. Users are shown a circular-cut picture that is rotated to random, non-standard angle. They are then asked to rotate the image back to it’s correct orientation.

As humans who have evolved to quickly process visual information on the real world, we’re all born with very good software for determining which way is up. Computers, however, are currently nowhere near as skilled at making sense of a potentially wildly varying array of images. You only have to look at the comparatively plodding movements of Honda’s Asimo robot or robot soccer to understand just how taxing a task this can be for a machine.

Obviously the method shares some characteristics with other image-based CAPTCHA methods (i.e. such as the ‘How many kittens do you see?’ method) but has one major advantage. Where other methods require humans to write new tests (i.e. ‘How many .. um.. goldfish?..’), fresh Socially Adjusted CAPTCHA tests can be easily automatically generated by a machine, but not as easily solved by one.

If you consider classic alphanumeric CAPTCHA methodology, a bot only has try to match around 40 characters to any given glyph — albeit a distorted glyph. Image orientation is powered by an almost limitless pool of feeder images, taken from wildly varying subject matter, aspects and angles. Sure, writing a bot that searches for horizons and perpendicular lines would be reasonable start but it will only get you so far (as the examples show).

Now, this is certainly no home run. It’s no improvement for the vision-impaired. Similarly, motor-impaired users may well know which way they’d like to orientate the image, but may struggle with the physical process of re-orientating the image. Perhaps great interface design can negate this problem.

There has also been some criticism that the method offers no protection against spammers who employ cheap human labor to crack CAPTCHAs.

However, as I see it, this is an unfair call as it falls outside of CAPTCHA’s working brief — to sort the humans from the bots. Sorting good users from mischievous users is an entirely different class of problem.

So, what do you think? Would you be tempted to replace your alphanumeric CAPTCHAs with something like this?