A small Jean Genie snuck off to the city,
Strung out on lasers and slash-back blazers,
Ate all your razors while pulling the waiters

Last week I saw the ‘Bowie Is’ Exhibition at ACMI, and the lyric above from his ‘Jean Genie’ (1973). I have no idea what a ‘slash-back blazer’ is, but, like lots of Bowie’s best lyrics, it’s a fantastic sounding phrase. And for all the chunky guitar riffs, martian make-up and gender-bending outfits, my favorite part was probably some footage of Bowie explaining his fantastically nerdy song-writing process.

It works like this: Typically he would take a pile of newspapers, cut the sentences into strips and then reassemble the pieces into brand new random sentences. Later in the 1990’s, Bowie worked with a programmer to create a system (the ‘Verbasizer‘) that automated this newspaper cutting/joining process.

So what you end up with is a real kaleidoscope of meanings and topics and nouns and verbs all sort of slamming into each other. – David Bowie

While most of these generated phrases mean nothing, others becomes the seed for bigger ideas and stories.

And I find that even maybe four words in here would… ‘The top kills himself.’ That sounds like a boss, doesn’t it? And suddenly I get a vision of a boss in the 30s throwing himself out of a window in the Great Depression. That might be enough to set me off writing a song about that. – David Bowie

While this partly ‘gives away the magician’s trick’, it also shows that often the true value of the random isn’t really its ‘randomness’ – it’s the ‘accidental sense’ that WE make of it.

Whether it’s seeing faces in clouds or our future in tea-leaves, humans seem to be hard-wired to search for meaning–even in completely meaningless things. We can’t help it.

I think that fractals are like a visual equivalent of Bowie’s random sentence masher. Though they emerge from a meaningless world of numbers, we can’t help making our own connections with them. And, like Bowie, software can help us with these too.

Tom Beddard’s Sub.Blue has been a home to great fractal experiments since the mid-2000s. In 2011 he teamed up with Kai Krause (of Kai’s Power Tools fame) and Be Weiss to create a new kind of graphics app. 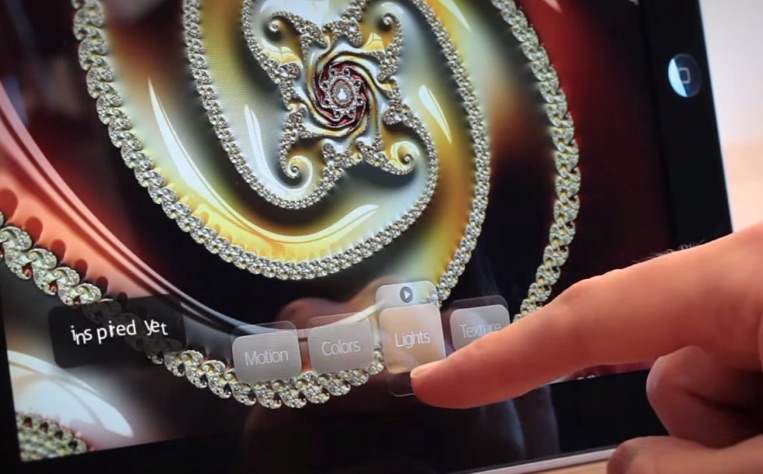 A year ago they released an iPad app called Frax that can generate incredible imagery with very little effort. The Frax interface is very minimal – it’s mostly swipes and pinches – so this is as close as you’ll ever get to ‘fractal fingerpainting’.

If you’ve got an IOS device, this is a fun introduction to fractals.

Chaotica is a fractal generation application available for most OSs. I’m not going to lie – you’ll probably need to read some tutorials to get real value out of this application. While the interface isn’t busy, it probably uses some concepts you may not be familiar with right now. 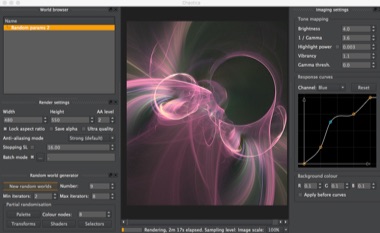 However I think it is worth a small time investment as it’s more versatile than Frax and has a strong, super-enthusiastic community behind it.

Chaotica Studio is $99 and Chaotica HD is $33, but the free version is very capable. The only limitations to the free edition are:

Certainly there’s nothing preventing you from creating great, original work like the piece below.

In the current – SuicidebySafetyPin. Made with Chaotica.

Obviously the next challenge is converting these random creations into viable designs. Backgrounds are an obvious application, but color and shape combinations are just as important. For instance, a logo might riff on those twisting leaf shapes above. Or a new site might simply be built around that blue-gold color palette. Surprise yourself.

Whether you’re a songwriter, a designer or a budding novelist, a blank page can be a cruel taskmaster. ‘Sentence mashups’, fractal tools and other random content generators can be a great way to route around your normal design habits into new ideas.

Maybe the ‘design earth’ has been flat for long enough.