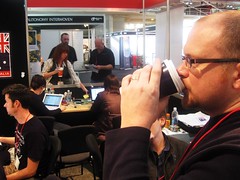 Here at FullCodePress, the 24 hours are over—each of the sites are finished, the clients and teams are taking a well-earned rest. Now, it’s time for the judges to cast their careful eyes over each site. Let’s take a sneak peek inside the judging.

We’re hidden away in the media room here at CeBIT, having spoken to the clients and the teams. Just like each team, we’ve had just 24 hours to get to know the clients, their needs, and their expectations for the sites. Now that the sites are done, it’s our task to assess each site on a number of key criteria.

Markup: Judged by yours truly. I’ll be checking to ensure that the markup on the site is semantically appropriate, sensibly named, structured cleanly, and of course valid. Being from a content management background, I’m also interested in whether each site’s CMS helps users keep the resulting markup clean and tidy, and encourages good habits among the users. I’ve seen many a good site ruined in the past by the fact that a CMS does a poor job of cleaning up someone’s code boo-boos, or worse yet, introduces validation errors of their own.

Security: Judged by Lee Kinsman from IBM. She’ll be assessing each site’s strength against attacks from shady characters using IBM’s Rational AppScan. “Rational AppScan attacks the website and impersonates a hacker,” she says. “It runs automated tests against all of the known vulnerabilties against web sites. The suite includes a bunch of platform specific tests for the known issues on that platform.” Lee’s especially impressed with the fact that one team chose PayPal. “It’s a secure choice,” she says. “Given only 24 hours it’s good that they chose something they knew would be secure.”

Of course, Lee will be running some tests of her own. “While it’s been running I’ve had a look through the sites and I’ve been running some basic scripts against the form fields, just to see if they bring up anything interesting. For example, some forms can leave a site open to an SQL injection attack.”

Accessibility: Gian Wild, a renowned accessibility ninja, will be assessing each site on its access strengths. Since the Aussie team is working with a disability advocacy group, this is especially important for this team–but with Rainbow Youth’s requirement for an open and inclusive site, we can be sure she’ll be holding the Code Blacks up to the same exacting standards!

“I tested against WCAG1 and also used a variety of well-known techniques that people with a disability are likely to use, such as turning images off, increasing text size, and turning stylesheets off.” says Gian. “In some areas I was very impressed and in others… I was quite concerned. As an example, there are some situations where increasing sizes or turning images off can cause important elements like the navigation to disappear, which is obviously not very good.”

Server-side technologies: Lachlan Hardy of Atlassian was in charge of assessing the frameworks and backend choices made by each team. “Obviously I was focusing on server side technologies and sustainability of the infrastructure. So interested in what CMS and how they used it, and so I was impressed to see that one team had built it solely with a particular product with only a few modifications, but they were uncommented — this can cause some trouble for future updates. The other site didn’t modify their solution at all although there are some mods to the framework itself and didn’t use the capabilities of their CMS to their full potential.”

Design: Assessed by Andrew Larkin of Adobe, who’ll be looking for how the sites’ respective designs matched the clients’ briefs.

“At the moment I like both a lot,” Andrew says. “My three key criteria are visual appeal, professional appearance, artistic integrity, and colour harmonies. So I’m looking at the way each translates and communicates the customer requirements.” At the moment, there’s pros and cons to each, but it always takes me a while to let the impact of a design soak in.”

Innovation and Mobile Devices: Lachlan Hunt of Opera will be assessing each site on its use of innovative technologies and their suitability for mobile platforms. If you’ve been keeping an eye on proceedings with HTML5, you might recognise Lachlan’s name from the HTML5 Working Group. So what’s innovation? “I’m looking for creative use of new technologies,” says Lachlan, “such as CSS3, microformats, any new DOM APIs, use of the canvas element, perhaps, things that are supported in recent browsers along with graceful degradation in older browsers.” No team was game enough to try HTML5, so this wasn’t assessed, although some CSS3 has snuck into each site’s stylesheets.

As for the mobile experience, Lachlan has brought a variety of Opera-powered mobile devices to use to test each site, as well as mobile Safari. “I loaned each team the devices to allow them to test. One of the Aussies even had a phone with Opera Mobile on it, so there’s no excuse!”

Content: Natasha Hall will be keeping her eye out for how well each team has managed to address the audience that’s expected to be the primary users of the site. Each client has a fairly broad variety of users, so it’s important that the content adequately serves all kinds of users.

“My feeling is because the representatives are deeply involved in the direction and the internal workings of both organisations, it can be easy for anyone to forget how content looks and feels to someone who’s never been there before,” says Natasha, “because a new visitor doesn’t have the context and deep knowledge an insider would have. So I’ll be looking at it from the perspective of a new visitor. If I can understand it with no knowledge of either of these organisations then hopefully someone else can do the same, also.”

User experience: Janine Sanderson will be assessing the user experience of both the site and the content management systems. “I’m looking for a compelling user experience. By compelling, I mean evidence that the team really understands the usage scenario of the website. It must meet the needs of its target audience and help them achieve their goals and compels them to act. I’m looking for the website to help the user kick ass, which is a phrase from Kathy Sierra. Both websites are there to empower their users, and make them feel better about their situation, so the sites need to speak to me and compel me to act.”

Whose site reigns supreme? Judging has just been completed—we’ll be sure to keep you updated with the results as soon as they’re revealed.