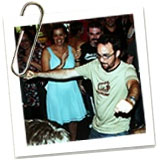 Darren Wood was the front-end HTML/CSS coder chosen for the New Zealand team which completed the winning Rainbow Youth web site. He kindly shares his experiences with SitePoint.

Yes. Over the years I’ve amassed a fair few code snippets so I organised these into a quickly-accessible structure. I also downloaded the latest jQuery and all the associated plugins I could need. This was a good thing — the Internet was a little flakey during the competition.

Tim and I had decided to use Ruby on Rails as the back-end technology before the event. I had never used Ruby before, so I did a little research and was pleased to find that RoR is very intuitive and a pleasure to use.

No, but once we started working on the Rainbow Youth website, it felt as if we’d been working together for years. What an amazing team!

You chose BrowserCMS – a relatively unknown Rails-based beta product — as the content management system? What were the key factors that influenced your decision? Did it cause any problems or limitations?

I didn’t have any previous experience with Rails, so Tim’s background was the main factor for choosing BrowserCMS. Overall, there were no major issues with the CMS, despite it being a complex product.

I used TextMate, Photoshop and GIT.

My main concern was how I was going to stay awake and alert for 24 hours straight. It turned out to be quite easy. Adrenaline and caffeine take care of most of the heavy lifting. The major challenge was keeping motivated between 4am and 7am.

Working with the team and client. Putting six strangers in a room (well — it felt more like a fish bowl) and asking them to build a fully functional website in 24 hours could have ended badly. Our team and the clients, Clint and Daniel, were fantastic. “A+++ Will trade again!”

Sadly, yes. The client had a huge list of requirements so our first major job was to prioritise. From a front-end code point of view, I would have liked to use more progressive techniques — perhaps HTML5 and sophisticated jQuery goodness.

In which areas do you think you beat your competitors?

It’s tough to say. The Australian team produced an excellent website. I think our strength was the selection of motivational music during the wee hours!

And in which areas did they beat you?

I think the Australian team took more time scoping their project. We attempted to include as many of the client requirements as possible, which probably left our site a little less polished in some areas. They also seemed a lot less stressed than we did!

Tim and I agree that we probably should have rolled our own CMS. BrowserCMS is feature-rich but a little too hardcore to wrangle in 24 hours. I also would liked to have spent more time tweaking the layout of the numerous website forms.

Yeah — make sure you sleep every twelve hours or so!

Absolutely! It was an amazing experience which I hope to re-live at some point. Our team was brilliant and we all came away with a solid group of new mates!

By day, Darren Wood is an interface designer-developer at Marker Studio, Auckland, New Zealand. By night, Darren is known as a web geek and/or “Mr Microformats”. At any time, you can be sure he is an advocate of accessible, semantic HTML.