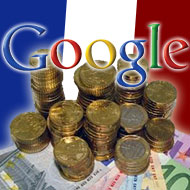 The French Government has proposed a tax on websites such as search engines which use pay-per-click adverts. Although the scheme appears to target major companies such as Google, Yahoo, Bing, and Facebook, it has the potential to affect any website which raises revenue from advertising.

Money raised by the tax will be plowed into creative industries which have been weakened by the Internet. This could include the creation of legal online channels for books, music and video distribution. (France has some of the toughest anti-piracy legislation and new laws now offer authorities the power to disconnect and fine repeat offenders.)

One of the report’s authors, Guillaume Cerutti, said that the tax would end “enrichment without any limit or compensation.” The authors hope to get Europe-wide support for the proposals but that it was “legally and technically” possible for France to go it alone. Internet advertising revenues in France are estimated to be over $1.1 billion and the scheme is expected to raise $70 million from companies whether they have a French office or not.

Of course, this is another in a long line of uninformed and technically inept strategies from Governments around the world. The story makes the headlines, sounds great to the majority of voters, but has little grounding in practicality and could ultimately result in an overall net loss.

The first issue: how can the Government monitor sponsored links when they are clicked by French users? ISPs could be forced to implement link monitoring software but that’s a huge and costly undertaking. In addition, how would revenue amounts be associated with each link? Click costs can vary from a fraction of a cent to hundreds of dollars.

Tax collection would be the next hurdle. How many foreign companies would pay a tax bill from a country where they have no office or server facilities? If the legislation is applied fairly, the French Government would need to send tax bills to hundreds of thousands of companies with little chance of recouping the administration costs.

The legislation seems intent on hitting the large US-based Internet corporations. The least expensive option would be to collect additional money on profits generated by their French offices. That will almost certainly backfire; global corporations are adept at moving money to countries which attract the least amount of tax.

It appears the French Government has forgotten the Internet is a global network. Google, Yahoo, and Microsoft all have French offices, but they can be shut down if the costs outweigh the benefits. The lost jobs and income tax receipts could have a far greater long-term impact on the French economy.

Olivier Esper, Google France’s general director, called on the government to “favor co-operation rather than opposition between the worlds of Internet and culture via the logic of taxation.”

Does the French Internet advertising taxation plan have any merits? Comments welcome…

10 Troublesome Colors to Avoid In Your AdvertisingTara Hornor

Would You Tax IE7?Craig Buckler