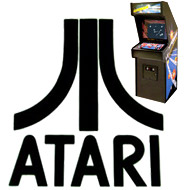 The late 70’s and early 80’s was a golden age for video games. Arcades were a thriving hotbed of innovation and revolutionary games were released which defined the genres we refer to today.

Atari Inc. was one of the pioneers. They were masters of the vector game format and dominated the first arcades with classics such as Asteroids, Battle Zone, Lunar Lander, Gravitar, Tempest, and the stunning Star Wars. Unlike many of their competitors, Atari games emulated real-world physics with custom-built cabinets and controllers. And let’s not forget forget their flawless bitmap-based games such as Breakout, Centipede, Pole Position, Crystal Castles, Gauntlet, Paperboy, and the amazing Marble Madness.

These first games were basic compared to today’s multi-million dollar epics, but they were simple to understand, fun to play, and totally addictive. Their longevity has been impressive; millions of people still play Asteroids — will you still be playing Call of Duty: Modern Warfare in 30 years?

Although the Atari company has been sold and resold several times, it remains one of the world’s strongest gaming brands. There are thousands of sites offering emulators, but it’s great to see a selection of free arcade and 2600 games have finally been made available at Atari.com. These are 100% faithful browser-based Flash versions of:

You’ll waste more time on these today than anything else! Let’s hope they release more soon … my vote would go for Marble Madness, Gauntlet, Star Wars and The Empire Strikes Back.

What was your favorite Atari game?

On Our Radar: Preprocessors, Taskbars, and Board GamesJasmine Elias

Play Online Games, Win Big Prizes, and Save up to 100% in the GeekGamesMick Gibson