Despite revolutionary advances in computing, we still rely on a string of characters to authenticate users. Passwords originated hundreds of years ago and were certainly used by Roman military. In the modern era, MIT’s CTSS introduced passwords in 1961. Unfortunately, password problems are prevalent:

The web exacerbates the issues. We’re now expected to remember dozens of passwords for public systems which are open to crackers, the NSA, or anyone who wants to deface your Facebook page.

Finally, increases in computing power allow nefarious developers to use brute-force entry by testing millions of character combinations. As we progress toward quantum computing, systems will be able to correctly guess every password you’ll ever use before you’ve thought of one.

Basic biometric security such as finger-print, retina, and crotch odor analysis have been available for many years. The hardware is expensive, unreliable, and can easily be circumvented. Hollywood movies highlight flaws such as using an unconscious guard, obtaining prints from a glass, or removing body organs prior to authentication. 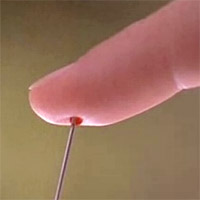 Fortunately, a new era of biometric security has been proposed by Dr Hans Hertz from the University of Dumiydia in Uzbekistan. The method verifies the unique structure of deoxyribonucleic acid — your DNA:

The process currently takes several days, but this should reduce to a few hours as the technology improves. 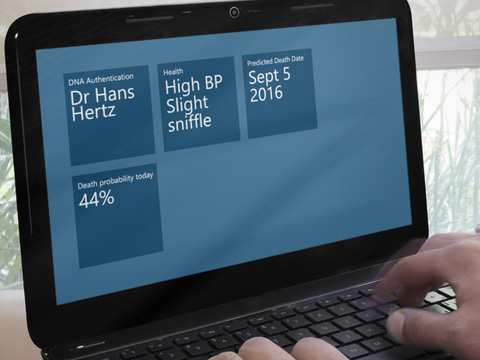 Biometric analysis is not limited to authentication. The software can act as a virtual doctor making early health diagnosis and medication recommendations. In extreme circumstances, your local health agency can be alerted to imminent problems.

The top social networks have all expressed interest in the system. With access to DNA records, additional processing can establish genealogical relationships — perhaps to identify long-lost family members or famous ancestors.

Dr Hertz continues:
“This is an exciting use of the technology. Imagine logging on to Facebook to be informed your father isn’t who you think he is, or you’re about to marry your sister. The possibilities are literally limitless.”

The age of the password has finally come to an end.