The top scalable and modular approaches I covered in the previous article in my CSS Architectures series all have pieces of brilliance that can help you change the way you think about and structure your CSS. They also overlap in many areas, which indicates which aspects of the process of improving your CSS are truly critical. Although you could follow any single approach while constructing a new site to great success, the fact of the matter is that what most of us are doing is trying to make sense of existing CSS run amok.

So, while the approaches I described are great on their own, what we really need is a way to combine the superpowers from them all to combat the evil of crazy code – a sort of “Justice League” of scalable and modular techniques. Furthermore, just as Rome wasn’t built in a day, it’s a fool’s errand to try to correct in one fell swoop thousands of lines of code that lack rhyme or reason. Thus, it’s a good idea to pass over the code in focused waves through a phased approach.

Last year, I had a project for a client where I was retained to do exactly that. After studying DRY CSS, OOCSS, SMACSS, and CSSG, I endeavored to distill them into their essential practices. In a moment of insight, I realized that all these approaches boiled down to the well-known adage “measure twice, cut once.” Of course! They all encourage looking at patterns, creating portable styles and modules that can be reused and not adding superfluous and redundant selectors or styles.

Additionally, my client had a lot of code and wanted to have flexibility in terms of the amount of changes that could be made to the CSS.  So, I developed a cohesive, phased plan of attack to reduce the number of lines in my client’s CSS. By the end, all of the practices and techniques for all four scalable CSS frameworks were incorporated, and the process I developed is very effective at reducing lines of CSS.

Once I created the process, I had to figure out what to name it. Taking “measure twice, cut once” as my base, I added CSS to it and this is what I got:

So, in this article, I’ll share with you my MetaCoax CSS refactoring process, designed to “de-bloatify” thousands of lines of redundant CSS—improving the readability, simplicity and extensibility of the CSS while keeping the visible design and functionality of the site the same. (Check out the slides from my recent presentation on de-bloatifying CSS.)

To get yourself ready to refactor CSS, here are some suggestions. First, be conversant with specificity and the cascade – it will make a huge difference. I hope that in the first two articles in this series (Part 1, Part 2), I’ve driven home that making selectors and rules overly specific limits their reusability. When using descendent selectors especially, specificity can easily and quickly spiral out of control, and that’s precisely what we’re working to avoid. Second, remember inheritance rules: certain properties are inherited by child elements; thus, how these properties cascade down the DOM should always be kept in mind.

The MetaCoax process is a four-phased approach. Each phase builds on the previous one, and they all incorporate practices that decrease the amount of code, increase scalability and maintainability and, as an added bonus, lay the foundations for a future-friendly site. We’ll look at a detailed breakdown of each phase and the practices and techniques each encompasses. In this article, I’ll cover phases 1 and 2. Details about phases 3 and 4 will appear in the final article in the series.

Note: An excellent tool to use while you’re going through the MetaCoax refactoring process is Nicole Sullivan’s CSS Lint, which identifies additional places in the CSS to clean up and gives you ideas on how to do so.

The first phase is focused on a minimum amount of work to improve a site’s CSS. These changes involve modifying the CSS but don’t touch the current HTML for a site’s pages. The goal is to make the stylesheet a little more lightweight and also easier to maintain and update with a small amount of time and effort. The method involves optimizing selectors while reducing redundancy with smarter reuse of rulesets. Even if you apply only the practices from this phase to your CSS, you’ll see an improvement in maintainability.

Here’s what we’re going to do:

To best optimize selectors, the goal is to use a shallow instead of a deep selector chain, making the chain as short as possible. This practice makes the code easier to work with, and the styles become more portable. Other advantages are reducing the chances of selector breakage, reducing location dependency, decreasing specificity and avoiding specificity wars by preventing overuse of !important declarations.

You have several ways in which you can shorten the selector chain, incorporating practices from all of the scalable architectures I outlined and further applying the “reduce, reuse, recycle” ethos. All of the practices are guaranteed to make the CSS code more forgiving. And isn’t that essentially the goal of updating our stylesheets?

The descendent selector (a b) is one of the most “expensive” combinatory selectors to use to target an element. Other expensive CSS selectors include the universal selector (*) and the child selector (a > b). What makes them expensive? They are very general, and thus force the browser to look through more page elements to make a match. The longer the selector chain and the more checks required, the longer the browser takes to render the styles on the screen. When matching a descendent selector, the browser must find every instance of the key selector (which is the one on the far right) on the page, and then go up the ancestor tree to make the match.

While this might not be a problem for a stylesheet of a few hundred lines, it becomes more of an issue when the size of a document nears 10,000 lines or more. Even more important, in adopting a future-friendly and mobile first approach, long selector chains create a situation where small, less capable devices are forced to load and process unnecessarily large CSS documents.

Note: Check the charts at http://caniuse.com/ and http://www.findmebyip.com/litmus/ to determine the browser support of other CSS selectors. 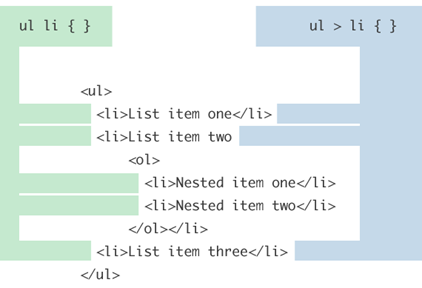 Figure 1. A Descendent Selector vs. a Child Selector

Although the child selector is still an “expensive” selector, it is more specific. This means that the browser won’t search as far down the inheritance chain to match the key selector. Thus, such a selector targets the element you need much better.

If you must use a descendent selector, eliminate all superfluous elements in it. For example:

The style will be applied whether the li is there or not.

Qualifying both #IDs and .classes with elements causes the browser to slow unnecessarily to search for the additional elements on the page to make a match with the selector. It is never necessary to qualify an ID. An ID has one of the highest specificity weights in CSS because it is unique to whatever page it is on, and it will always have a direct match on its own. Qualified selectors also cause the specificity of the selectors to be ridiculously high, necessitating the use of even more specific selectors and the use of !important to trump these super-specific rulesets.

can be simplified to

and further whittled down to

Each provides the same outcome.

Dropping an element class qualifier in selectors lessens the specificity of the selector, which better enables you to correctly use the cascade to override the style if necessary. For example,

would ideally be changed to

Even better, because it is more specific to the case of the