Yahoo! pulled out all the stops this morning in its fight against investor Carl Icahn and Microsoft. Icahn, who is a major individual Yahoo! stakeholder, wants to elect a new board of directors and sell the company’s search business to Microsoft. This morning, Yahoo! placed an open call to its shareholders on the company’s main page — the most visited on the web — in a content box slightly above the fold.

The box links to an open letter that clearly intends to paint Icahn as an out of touch investor with no real plan for the company. A headline quote at the top of the page reads, “It’s hard to understand these technology companies,” and is attributed to Icahn in the Wall Street Journal last year.

Yahoo! argues that Icahn “lacks a strategy that makes sense for Yahoo! stockholders,” and calls him out for flip-flopping on his position about whether Yahoo! should sell its search business to Microsoft. The letter includes a slide that attempts to show Icahn’s poor record when getting involved with public companies. 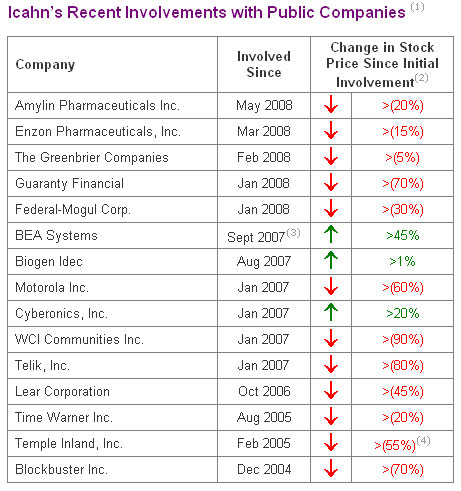 The company lays out its case for keeping its current board of directors and urges shareholders to vote to re-elect them. Yahoo! argues that the current board has “a clear strategy” for creating shareholder value (which includes its recent deal with Google to outsource some search advertising), and “the independence, the experience, the knowledge, and the commitment to navigate the company through the rapidly-changing Internet environment.”

Yahoo!’s 2008 annual meeting of stockholders, where the vote on Icahn’s proposal will take place, is to be held on August 1. That the company is so worried about the vote that it is willing to make a public appeal on its homepage may indicate how close the vote could be.

Icahn has been using his own blog to publicly make his case for electing a new Yahoo! board and seeking to restart negotiations with Microsoft, but obviously his audience is not nearly as large.

Of course, even if Yahoo! wins the battle against Carl Icahn, which Silicon Alley Insider predicts is likely, the company will still have to figure out a way to convert its massive amount of traffic into Street-satisfying advertising dollars.

Nine Fiverr Gigs That Save me $6,642 per MonthRyan Stewart