In part one of this Windows 8 review we discussed pricing, installation and the new interface. Part two examined the software provided in the new OS. In this final part, we look at productivity and performance before asking whether Windows 8 is right for you…

That said, Microsoft has made radical changes so be prepared for a few frustrating days learning how to navigate the new OS without a Start button. Fortunately, there are a number of keyboard shortcuts which make life easier (look out for an article coming soon).

One of the primary reasons I upgraded to Windows 7 Pro was XP Mode; a fully-licensed copy of XP SP3 which allowed you to run virtualized legacy software as if it were a native application. The bonus for web developers was that you could run real versions of IE6, IE7, IE8 and IE9 at the same time on the same desktop.

Windows 8 does not include XP Mode. The Pro and Enterprise editions support Hyper-V hardware-assisted virtual machines, but you’ll require an additional XP/Vista/7 license to use it. A shame, but it’s not as though many of us are bothering to test IE6 and 7 any longer. 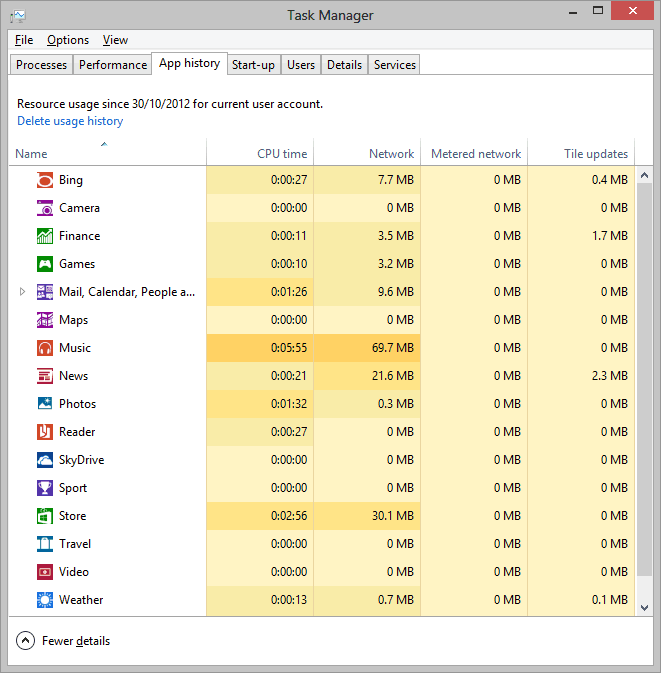 I was a little disappointed with Windows 7 performance; it was not noticeably faster than a service-packed Vista. A cold boot took around a minute to reach the login screen followed by ten minutes of sluggish performance while applications were pre-cached.

Windows 8 blasts its predecessors out of the water. Booting takes a matter of seconds and the system is usable immediately after login. The OS seems less resource-hungry than before; CPU, memory and battery consumption have been reduced. Perhaps that will change as I install further applications but, for the moment, I’m more than happy.

The Windows Task Manager has been vastly improved and it will help you discover performance issues:

To increase speed further, Windows 8 hibernates rather than fully shuts down. This has a number of consequences, e.g. services which are set to start manually will still be running between subsequent shut downs. Only a system restart will stop them.

Should You Upgrade to Windows 8?

Microsoft has attempted to create a unified system but the Metro and desktop modes are simply different interfaces in one OS. It’s apparent the developers favored touchscreen devices at the expense of PCs where Metro can be clunky and confusing. Admittedly, the tablet market is ascending as fast as the PC market declines, but Microsoft’s core market is desktop business users. Windows 8 could be a little ahead of its time.

Perhaps Metro will feel natural to IT novices but, in reality, how many people have never used Windows before? Windows 8 is initially disorientating and I suspect businesses will be put off by the training costs and lost productivity. I’m not convinced the improvements justify that expense; many people will skip Windows 8 and wait for version 9. (Is Microsoft suffering from classic Star Trek movie syndrome where a ‘good’ release arrives every other version?!)

On the plus side, no one can accuse Microsoft of playing it safe. The company’s biggest competitor is itself and many people are happy to use decade-old editions of XP. Windows 8 tries a new approach and, while it may not convince long-term IT users, it it possible to return to the more familiar desktop and methods.

Windows 8 has one other benefit: Microsoft usually listens to criticism. I expect the OS will evolve rapidly — especially if sales are slow. Most business users wait for Service Pack 1 and the company has a good track record of supplying fundamental improvements. I would not be surprised to see the Start button make a triumphant return.

The first few days are frustrating, but I encourage you to persevere. I cannot claim undying love for Windows 8 — and thoroughly detest some features — but I’m glad I upgraded. For performance alone, it would be difficult to return to Windows 7. Unfortunately, it took several weeks to reach that conclusion and many people will give up before then.

Upgrade to Windows 8 Pro at Windows.com or windowsupgradeoffer.com. Alternatively, buy the 32 and 64-bit boxed retail version at:

All prices are discounted until February 2013.

How to Boost Your Windows 8 ProductivityCraig Buckler