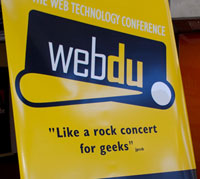 Now well-established in it’s sixth year, WebDU in Sydney is the top Australian conference for Adobe-based technologies (primarily Flex and ColdFusion). The venue for 2008’s conference was the Sydney Convention Centre – a move away from Star City casino, where it has been held for the past four years, although not a move away from the convenient but highly tourist-centric Darling Harbour.

One of the long-standing WebDU traditions is the opening animations from long time partner and silver sponsor, design agency Nectarine. In fact, as delegates picked up their conference bags, worked out how to get onto the wireless and caught up with old faces, animations from previous years were running in the main auditorium, entertaining those waiting for the opening keynote from Adobe’s Principal Evangelist, Mike Downey – including classics like the super-heroes from 2005 (and of course, the lovable Sparky) and 2006’s Don’t Mention the Merger. Although the 2008 animation has not yet been posted, all the previous years’ can be found in Nectarine’s animation portfolio.

After a welcome from conference organiser Geoff Bowers, Mike Downey kicked off proceedings. The opening keynote started on Adobe’s latest focus, moving beyond the desktop, with an overview of the AIR platform (Adobe Integrated Runtime) – a desktop client running on Windows, Mac and Linux which allows web developers to build desktop RIA’s using either Flash/Flex or HTML and JavaScript. Mike demonstrated just how quick AIR development is by knocking up a simple Flash video player on stage. He also demonstrated some of the new features of Flash Player 10, including z-axis manipulation and “Pixel Effects” – real-time rendered effects on video – before moving onto the beta Flash authoring environment, which features some pretty nifty new animation features and inverse kinematics for character animation. Kiss the timeline goodbye, Flashers!

Creative Suite Evangelist Greg Rewis then demonstrated as-yet-unreleased Fireworks CS4, which he cheekily referred to as the “bastard stepchild” of the creative suite product family. Fireworks is now being positioned as a rapid prototyping tool, and it generates some pretty clean markup and CSS – a definite time-saving starting point for web site projects. Greg also ran through Dreamweaver CS4, available on Adobe Labs as a public beta to owners of the CS3 suite. Dreamweaver now uses Safari as its internal rendering engine, giving it very good web standards support in design view. Three new features that were demonstrated were related files – quick access to linked CSS, JavaScript and include files – vertical split view, which also allows two separate code views – and live view, which I can best describe as like having an interactive version of Firebug right there in Dreamweaver – pretty impressive for working with CSS and JavaScript.

After morning tea, delegates split off into four rooms for sessions in the four streams: Flash/Flex, AIR/JavaScript, ColdFusion, and Web Essentials. Presentations on accessibility in Spry, CF8’s PDF features, Flex in Acrobat, custom tag development and the mobile web as well as introductory sessions on ActionScript 3 and AIR kept the attendees busy until lunch, after which it was back for more: ColdFusion performance monitoring, Ajax in CF, Google Maps, and Flash video to name just a few.

Long-time teacher, author and all-round standardista Stephanie Sullivan launched the afternoon sessions with her presentation on the CSS-based layouts that come with Dreamweaver CS3 – templates that she authored for Adobe herself. These templates are structural markup only – no images, no styling – designed to provide a solid structural baseline for developers new to CSS layout, or a quick start for more experienced CSS practitioners. Stef ran through the principles of the five basic types of layout included in the template set – fixed width, liquid, elastic, hybrid, and absolutely positioned (although everyone was urged to stay away from the absolutely positioned layouts). She then covered a few points about clearing and avoiding “float drop” – important things to remember when working with floats, which many of the layouts involve. Stef also ran a companion session later in the afternoon on troubleshooting CSS layout problems.

Lisa Herrod: User Testing for the Rest of Us

Lisa Herrod’s presentation on user testing was definitely one of my highlights of day 1 – packed with really useful information on user testing that almost everyone could take away and put to immediate use. In fact, it was a real shame that more of the developers weren’t in this session – the quality of ColdFusion and Flex projects around Australia could have been given a real boost!

Lisa covered the types of usability testing that are commonly carried out – expert reviews, comparative reviews, and user testing – and framed everything for the developer who may have been asked to start doing usability testing, either by learning the process themselves or by engaging a professional. She gave practical examples of where the strengths of each type of testing lie, and where to cut corners if the budget is tight (as well as where definitely NOT to cut corners). And her slides were funny as hell.

Rakshith N, an engineer at Adobe in India, gave this introductory session on the new Ajax features in ColdFusion 8. He covered the three layers of ColdFusion’s Ajax architecture – underlying JSON support, the Ajax “plumbing” which connects server-side logic to the front end, and the user interface widgets (YUI and ExtJS components – noting that the JSON support and “plumbing” features could be used to connect with any interface library. Particular attention was paid to CFAJAXPROXY, an almost magical tag which allows server-side components to be called directly from JavaScript, with ColdFusion’s “plumbing” taking care of datatype conversion and other such pesky matters.

The built in Ajax features are the first experience that many ColdFusion developers have with Ajax, so I don’t think that many of them appreciate just how powerful and time-saving they are. And it was great to hear from Rakshith, one of the engineers who worked directly on these features – you’d have to assume that he would know them better than almost anyone!

While the social aspect of WebDU has always been important, the team absolutely outdid themselves this year with their special event – the entire Kingpin bowling, pool, arcade game and laser tag centre was booked for the night, for all conference attendees. And if that wasn’t enough, the first three hours of drinks and nibbles were free.

From all reports, an outstanding time was had by everyone. Rumours are that despite the discovery of a karaoke corner, most delegates even made it to the Day 2 keynote… but that’s another post.