Continuing on from the last installment in this series of articles, “Surviving logo design in the real world,” Felix writes about the components of a logo – symbols and wordmarks.

As designers, we should all know the difference between a wordmark logo and a symbol based logo. When designing logos, designers will likely aspire to design symbol based logos – due to that low grade design noise out there… wordmarks seem like the easier thing to do. There are a lot more mediocre wordmarks out there than symbols. The reason is probably that designers feel it is more creative. However, if we are looking at effectiveness, then both are valid and creative.

We shall look at two examples to see how a company and recognition can affect the evolution of how a logo is used.

A symbol based logo

Apple is an organisation that everyone has heard of. One would have to have been living in a cave to not recognise the apple logo with a little bite out of it – or the little white stickers that the marketing department at Apple hopes will be stuck on the back of car windows.

However, this recognition was built over time – over decades. The usage of the Apple logo in its initial form was accompanied by a “low power” wordmark ‘Apple’ and was dropped for the symbol as recognition of the company increased to to such a point that even a 2 year old could recognise it.

If you are hoping to create such an iconic symbol for an organistation that may or may not get to such dizzying heights of recognition, you might partner your iconic symbol with a wordmark. That way, you leave the option to drop the wordmark if and when the organisation reaches that point. If the organisation never reaches that level of recognition, it has the wordmark to partner it — which in the end gives more options for application.

A wordmark based logo 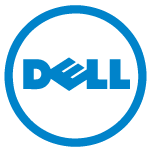 The Dell logo is a wordmark based logo that incorporates the name itself. The current logo includes a circular device which is basically window dressing and more to do with application than the logo itself. However, the power of this logo cannot be denied. As a logo, people all over the world can read the name of the company. There is no mystery. If someone does not know the company, it is easy for someone to find out who or what it is. While using tall bold letters, the letter ‘E’ is tilted and joins the ‘D’ and the first ‘L’.

While the logo does look like it is based on Arial Black (or something similar), the tilted ‘E’ gives it enough uniqueness to make it a strong wordmark that cannot be mistaken. The designer possibly knew that using bold capital letters would make the viewer feel that the company was big, solid and even corporate — important aspects to build trust with potential customers in its market, which includes large-scale enterprise operations.

A great wordmark will incorporate strong design reasons as well as incorporating the company name — or at least elements of it.

Paul Rand produced some of the most effective wordmarks in the history of graphic design.

The above companies are powerful for many reasons – many of the reasons come from how the organisation was run and how successful they are or were, no matter who originally designed them. Our job is to lend strength to the organisation through meaning, inference and recognition of the single element that represents it as a whole, by designing its logo.

However, the question remains — wordmark or symbol? This can be a hard decision for designers. Sometimes you need to give your thumbnailing a chance and just doodle without too much agenda — don’t discount doodling time!

How do you feel about wordmark and symbol based logos? The answer will likely mirror your design style.

Elevating Wordmarks with the Power of a Custom FontAlex Bigman