SOA, or Service Oriented Architecture, is often tossed around as an enterprise-only term, used by companies no smaller than Amazon. Fear not, SOA can be used by the Little Guys too! Let’s break the mold.

The goal of any SOA implementation is to segment portions of an application by logical and business functions. It can break down monolithic applications into many smaller, consumable services. SOA can be used by the Little Guys, but it’s generally not something you want to apply until experiencing growing pains. There’s no cut-and-dry answer to when SOA should be used, but database inefficiency, team scalability issues, deployment pains and unmanageable complexity are all key indicators. Smaller teams might want to use SOA in hopes of easier maintenance, faster iterations, more robust tests, and scalability.

In this article, I want to take an introductory look at the architecture of most monolithic Rails apps, compare it with a service-oriented architecture, and then implement a very basic service with Sinatra, Redis and RSpec. To demonstrate SOA, we’ll highlight a (fictitious) music application that connects people across the world with similar musical interests.

Typical Rails apps rely heavily on one database. Usually, we cram all our primary data into the database and build the MVC stack on top. These apps have the following architecture: 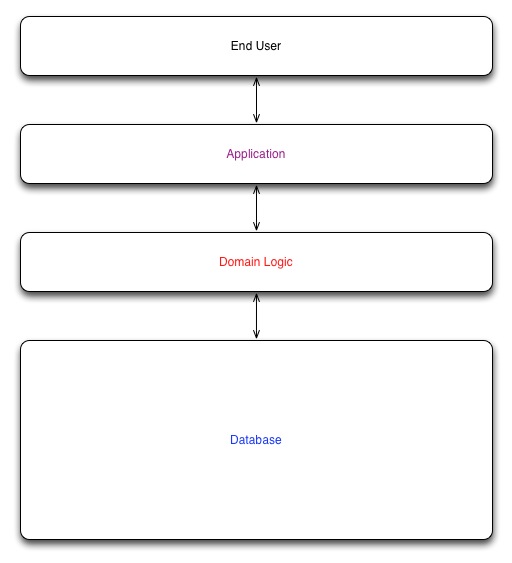 This structure works great as apps grow into existence, but it has a number of long-term issues:

A Service Oriented Architecture tries to alleviate the issues with monolithic Rails apps. It would be unwise to jump into an SOA when creating new apps, as the nature of the architecture can often add unwanted complexity. It’s usually a late player in the game and becomes useful when a Rails app grows too large. The goal is to take a large application and revive it by breaking down its logical components into individual services. Each service can be relied on atomically to carry out a set of tasks for its respective domain. Compared to the monolithic Rails architecture, here is how a SOA application might look: 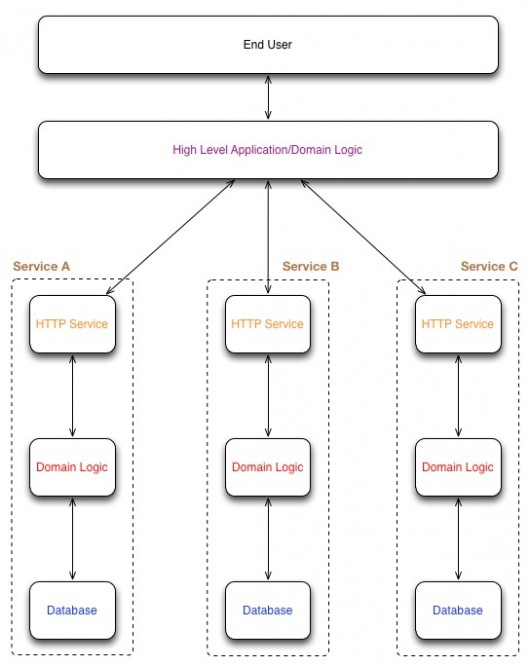 Reconstructing an application into services can provide a handful of improvements:

Let’s look at how the social music application can be broken into services. The goal of the application is to enable users to find people across the world with similar musical interests. This social app pulls artists from Last.fm, allows users to express interest in artists, and provides a list of users who like the same music.

The first question that comes to mind is, “How do I break my application into services?” Of course this depends on the application in question but there’s a few key guidelines to follow and a few options at hand.

Next, consider where the application changes. Generally, you want your services to remain stable over time so it’s best to keep frequently-changing functionality in the high-level application, disjunct from the services themselves.

Consider the type of data and the frequency of read/write operations. Individual services can be optimized for one or the other, or both. Registering interest in an artist is a high-write function and aggregating similar users is a high-read function, both of which will exist in the Interest service.

Writing tests first helps define how your HTTP service will look to the outside world. It’s also the most critical component to test in any SOA implementation. Don’t stub or fake the request to the service, test the real thing. At this point, we assume the User and Artist services have both been implemented. Let’s write some tests for the Interest service using RSpec.

For the sake of brevity, the Services::User and Services::Artist classes are assumed to be simple HTTP wrappers around the User and Artist services. They invoke similar POST requests to their respective HTTP endpoints to create the setup we need to test the Interest service.

This test makes a POST request to the Interest service to register a user’s interest in a particular artist. It creates a JSON string to send as the POST body. Finally, we check to make sure the response is OK.

Like any other HTTP service, it should be wrapped in a native Ruby library. I won’t cover creating the wrapper library but it should be implemented in a similar fashion as the test case above. REST Client, HTTParty, Faraday, ActiveResource and many other HTTP libraries could be used to build a Ruby wrapper.

Sinatra is a perfect candidate for services. It furnishes a clean DSL and is easily maintained, provided the service remains simple. Let’s look at how we would implement the Interest service method tested previously.

To implement this endpoint, we first initialize Redis (likely to be abstracted out of this block), parse the JSON body so we have access to the user and artist IDs, then register the user’s interest in Redis. The key for our Redis set is a combination of the “artists:” namespace and the artist’s id. Similarly, we track all the artists a particular user is interested in. After a number of users have expressed interest in an artists, the Redis sets will look like the following:

I won’t go through creating the service endpoint to extract users with similar interests but it would use Redis intersections to determine this relationship:

To find similar users, we first find all the artists the given user is interested in, then map those to Redis keys. We then find the intersection between the Redis keys (using the splat operator) which provides us with an array users’ IDs who are interested in the same artists.

A Service Oriented Architecture can dramatically change the way an application is managed and developed. It can provide a nice separation based on business and engineering needs. It’s not without its faults, however. Migrating to a SOA can add overall complexity while simplifying individual components. Its vast decoupling can make data joins difficult, force normally arbitrary decisions to become complicated, and potentially become unwieldy. Uncle Bob Martin recently wrote an article in this vein: Service Oriented Agony.

The benefits can certainly outweigh the costs in many situations. Before taking the dive into transitioning your app to a Service Oriented Architecture, continue researching best practices around service segregation.

We’ve only scratched the service of SOA. Service communication, authentication, testing best practices and caching are all good follow-up concepts. This article should be enough to get even the Little Guys moving towards maintainable, scalable solutions.

Why CoffeeScript is One of the Good GuysEarle Castledine