By the time you add up all the relevant desktop clients and common webmail providers, you are talking about between 15-30 platforms you need to test for. Even if all those mail clients were friendly, modern and predictable net citizens, that would still be a big task.

A few years ago — joy of joys — things got significantly harder when Microsoft chose to cripple the rendering-capabilities of their flagship mail product by replacing its HTML rendering engine with Word.

This is roughly equivalent to replacing your lawnmower with a sand wedge — you can try all day but it just doesn’t cut it.

Although at the time, there was some speculation that the decision was motivated by security concerns, Microsoft have since made it clear that they were simply more interested in making the Outlook 2007 to Outlook 2007 experience better (read the Campaign Monitor guys’ post for the nitty gritty).

This has to stop. Email is an open standard and we should be past the time when we NEED to continue to spruik this argument to Microsoft. Put simply, Word’s horrid understanding of HTML is costing us all time and money while detracting from everyone’s experience. 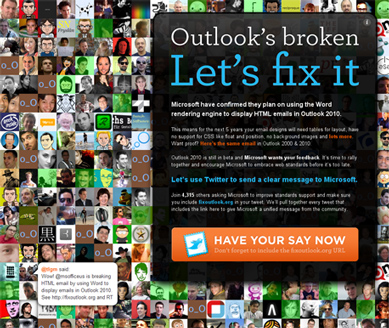 At this point in time, Microsoft appear to be intent on using the Word rendering engine in Outlook 2010 — but it’s not too late. The app is still in early beta and Microsoft are asking for feedback.

So what do we do about it?

The most immediate impact you can have is getting down to http://fixoutlook.org/ and tweeting to let Microsoft know this is NOT cool.

If you’ve ever sobbed salty tears into your keyboard over another Outlook 2007 email fail, you won’t need much convincing. download movies

Microsoft have offered this disappointing and frankly pretty lame first response to the fixoutlook.org initiative.

How to Unblock Unsafe Attachments in Microsoft OutlookCraig Buckler