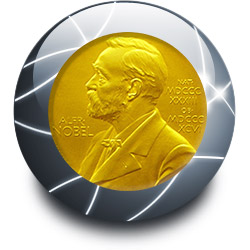 This is an unusual story. The Internet has been nominated for the 2010 Nobel Peace Prize. Although the Nobel Committee maintain a strict silence over candidates, they can be announced by the people who made the nominations, including former laureates and selected members of governments and universities.

The Internet was proposed by the Italian edition of Wired Magazine. Their manifesto:

We have finally realized that the Internet is much more than a network of computers. It is an endless web of people. Men and women from every corner of the globe are connecting to one another, thanks to the biggest social interface ever known to humanity.

Digital culture has laid the foundations for a new kind of society. And this society is advancing dialogue, debate and consensus through communication. Because democracy has always flourished where there is openness, acceptance, discussion and participation. And contact with others has always been the most effective antidote against hatred and conflict.

That’s why the Internet is a tool for peace. That’s why anyone who uses it can sow the seeds of non-violence. And that’s why the next Nobel Peace Prize should go to the Net. A Nobel for each and every one of us.

A new website, internetforpeace.org has been created so you can voice your opinion. The ambassadors include 2003 laureate Sherin Ebadi, Riccardo Luna of Wired Italy, Chris Anderson of Wired US, David Rowan of Wired UK, Joi Ito of Creative Commons, Nicholas Negroponte of MIT, scientist Umberto Veronesi and — strangely — Giorgio Armani the fashion designer.

The Internet is an odd choice for the Nobel Prize. Since 1901, there have been 120 awards: 97 to individuals and 23 to organizations such as the UN Peacekeeping Force in 1988, Amnesty International in 1977, and the Red Cross in 1917, 1944 and 1963. The Internet is unusual because it’s an inanimate, er, object? Actually, it’s not even an object — it’s a tool which has no physical presence.

But it leads me to question what is actually being nominated and who would step up to the podium?

Would an Internet win also lead to other strange nomination possibilities? The telephone, radio and television are all tools which had a larger impact on communication and democracy. Some would argue that the gun or nuclear devices have done more to enforce peace than any other invention.

The Nobel prize is often controversial so there’s no reason why the Internet shouldn’t win. It’ll be an award for us all to share — I’ll be putting “2010 Nobel Prize Winner” logos on my websites!

What do you think? Is the Internet an absurd nomination or does it deserve the 2010 Nobel Peace Prize?