This story has taken on a life of its own. The news that Australian online retailer Kogan.com is applying an Internet Explorer 7.0 tax has been reported by web and traditional media agencies across the world. The business owner, Ruslan Kogan, wanted to recoup the time and costs involved in making his website work in the antique browser. Therefore, an extra 6.8% is charged to customers purchasing goods using IE7 — or 0.1% for every month since its launch. 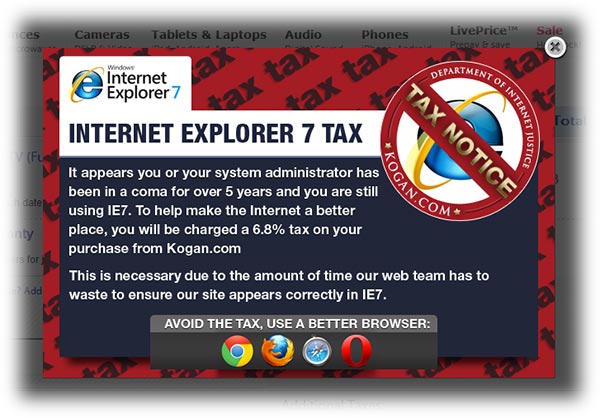 The amount of work and effort involved in making our website look normal on IE7 equaled the combined time of designing for Chrome, Safari and Firefox.

In reality, a charge is never applied and the “tax” is discounted as soon as you reach the payment page. The story was a highly effective marketing stunt which captured the headlines. Kogan admits that just 3% of his audience use IE7 and I have doubts about their development frustrations; the site doesn’t look great in the old browser and crashed my installation! However, Kogan received near universal praise for his taxation idea.

I’ve made scathing comments about IE7 in the past. For me, it’s worse than IE6. While IE6 had plenty of bugs, they were well understood and easy to code around. IE7 fixed many of the major issues but introduced several new which were far more difficult to solve. So an IE7 tax is a great idea, right?

Kogan’s browser policy made me uncomfortable. As (good) website developers, we have a duty to support the web applications people are using. We may not like it and we can encourage users to switch but, ultimately, we cannot dictate what browser an individual should or shouldn’t use. I’m amazed anyone wants IE7, but they must be permitted to make that choice. Some may be unable to use any other browser.

That’s not to say all websites must be fully IE7-compatible. Pixel perfection is futile and it struggles with JavaScript-heavy pages. I rarely give the browser more than a cursory glance — if a site’s functional, that’s good enough. In the case of complex HTML5 web applications such as a canvas-based game, IE7 users may receive little more than a message stating their browser is not compatible with suggestions for alternatives.

However, a downgraded experience is not the same as active prejudice against a subset of users. Put it this way, how would you have reacted if Kogan taxed shoppers using a screen reader? They’re even tougher to support and used by far fewer people.

Kogan’s IE7 tax was an incredibly successful marketing ploy. Even if the site lost 3% of IE7 customers, it was more than counteracted by the free worldwide publicity the company received. You’re unlikely to be so lucky — blocking (or taxing) users with a specific browser will harm no one but you.

The IE7 tax story highlights a worrying trend in the IT industry. Web users are being forced to use specific applications because of OS lock-in and a resurgence of browser-targeted development. Freedom of choice is being stifled by companies who think they know what’s best for us.