Was it only two weeks ago we were all whistling happy little tunes and walking with that little extra pep in our step? 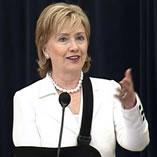 As Craig reported, Youtube was dropping support for Internet Explorer 6 and Digg was strongly rumored to be considering it. Perhaps that happy kingdom populated by only cooperative, predictable, compliant browsers was finally starting to come into view.

Or not. Perhaps reports of IE6’s imminent demise has been exaggerated.

At a recent State Department Town Hall Meeting, one of Hillary Clinton’s staffers wanted to know why IE6 was mandated for State Department use. As this staffer had recently transferred from the Firefox-using National Geospacial Intelligence Agency (that’s secret spy business), she reasoned it couldn’t be pure security concerns.

According to Under Secretary Pat Kennedy — whom Hillary happily deferred to on the matter — even though Firefox is free, ‘nothing is ever REALLY free’ (insert air quotes around ‘free’), with cost incurred in deployment, training, applying patches and support across a large, geographically widespread organization.

Ok, while there’s no doubt at all this is true, surely this is budgeted for as simply part and parcel of owning computers? After all, this is their main web-facing application. If they are saying they currently AREN’T spending any significant money on patching and supporting IE6, I think we should all be worried — particularly given IE6’s long and inglorious history of security exploits.

It is, nevertheless, probably a sobering thought for us web folk. If such a large, well funded and publicly-scrutinized organization as the U.S. State Department finds it difficult to move on from an 8 year old piece of software, what is it going to take to overcome the inertia in a million town libraries, community colleges, city councils and corporate cube farms?

I’m guessing that the majority of these organizations are still clinging to Windows XP, after being spooked off the Vista upgrade. My fingers are crossed that Windows 7 will be good enough to get IE8 onto a lot of new systems — shuffling IE6 off to retirement in the process. However that remains to be seen in the months ahead.

It is interesting to consider though: Does this mean Hillary’s IE6-using staff aren’t able to watch the Youtube video explaining why they have to use IE6?

I think HTML5 may need an <irony> tag.