Google has long been rumored to be working on an operating system to compete with Microsoft’s Windows. When they launched their browser product, Chrome, in September, we noted that it essentially was Google’s operating system — a UI for the OS that the web is becoming. “If the web is the operating system of the future, as many contend, a browser designed specifically with running web applications in mind will be hugely important and potentially have an advantage over other players,” we wrote.

Now, tiny Emeryville, California-based Good OS, has taken the browser-as-OS idea a bit further with the announcement of their latest operating system, dubbed “Cloud.” Good OS is most famous for the gOS, a Linux distribution that debuted last year on the Everex gPC, a $199 computer sold at Wal-Mart. gOS is a slimmed down version of Linux that is made to specifically play nice with web applications and web-centric apps like Google Calendar, Docs, Gmail, Skype, YouTube, and Firefox.

The new Cloud OS product, which was announced today at the Netbook World Summit in Paris, France, is specifically designed for netbooks and nettop computers. Cloud boots “in seconds” into a browser that is specifically designed to make access to cloud based applications, like Google’s suite of web apps, quick and easy via a built-in Mac OS X-like dock that has been added to the browser. Notice that the browser looks a lot like Google Chrome, which is open source. That seems unlikely to be a coincidence. 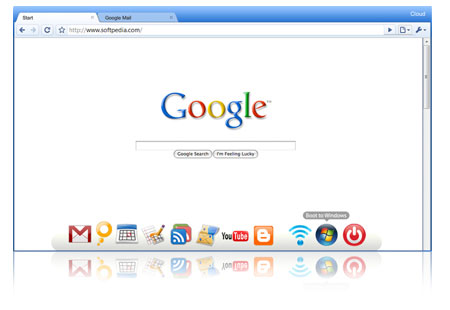 Because Cloud integrates a browser with a compressed Linux kernel, users can also load other applications, such as Skype. The OS can be installed alongside Windows or another Linux distribution, and users can switch between them. Cloud’s footprint is a tiny 35MB and can boot from a thumb drive or CD. According to the web site it “does not require additional hardware and is compatible with any operating system.”

It will find its way onto GIGABYTE Touch-Screen Netbooks early next year, along with Windows XP. Those machines are expected to debut at CES in January.