To highlight this release, I thought I’d give you the lowdown on a key technology I used in the development of these extensions: HTML.

Yep, plain old HTML. Used wisely, it can be the secret weapon that makes your Firefox extension stand out from the crowd.

This article assumes knowledge of the basics of developing Firefox extensions. If you’re new to the game, you can get up to speed with my free Build Your Own Firefox Extensions PDF ebook.

One of the great aspects of XUL components is that their appearance is largely out of our hands. This makes for interfaces that are consistent and accessible; they’ll always look like the rest of the browser interface, whether viewed with the default skin, a custom skin, or platform accessibility tweaks like large fonts.

Sometimes, however, you need to give your extension a bit of styling or functionality beyond what’s available using only XUL. In those cases, you might consider using HTML inside your XUL documents. This gives you access to all the CSS and JavaScript functionality you have when developing web pages.

Firebug is a prime example of an extension requiring HTML for parts of its interface, because XUL simply lacks the elements for the job. Let’s take a look at Firebug’s HTML panel, which is a representation of the DOM being inspected. Think about how you’d build it in XUL:

Figure 1. The HTML panel in Firebug 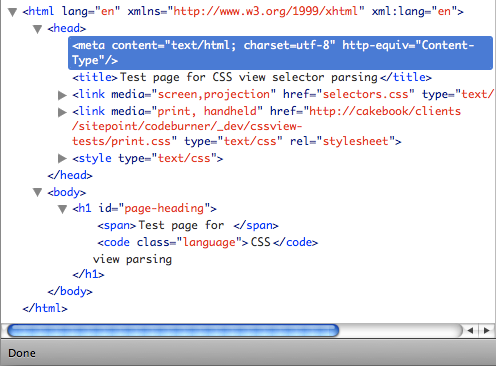 Well, it’s a trick question. It’s impossible to build it in XUL because XUL lacks any elements that can be arranged to create a tree-like structure with syntax highlighting. The nearest option is the tree element, which can be used to create a similar structure, but only within the constraints of columns and rows. Here’s that element in action in the DOM Inspector:

Figure 2. The document: DOM nodes panel in the DOM Inspector 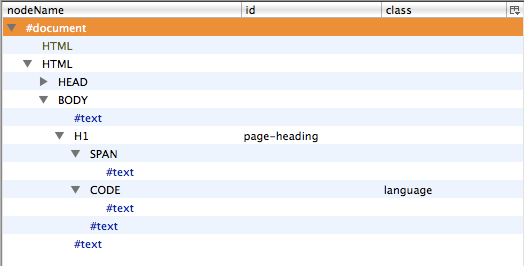 When I was first building CodeBurner for Firefox, I searched through the entire XUL Reference looking for a group of elements that could be used to build a DOM tree. Upon discovering that there were none, I decided to build it in HTML, style it with CSS, and add the expand/collapse behavior with a bit of custom JavaScript.

Here are some other examples of when I think it’s appropriate to use HTML in developing a Firefox extension:

If you find yourself wanting to use HTML simply because of its additional styling potential, you should first consider whether you really need the styling, or whether it’s just eye-candy, or could be accomplished in some other way.

Absolute positioning in particular should be used with extreme care, because of the limits it places on the flexibility of an interface. In a great many use cases, there are other ways to achieve the end result: the stack element, for example (within which elements can be positioned absolutely), or simply leaving elements in their flowed positions.

A good example of where an interface genuinely needs the increased styling potential is the X icon to delete the contents of the search box; this was added to CodeBurner for Firefox in Version 1.5. This proved impossible to implement with an XUL textbox, so using HTML was the only option.

Figure 3. The search box in CodeBurner for Firefox version 1.5

I’ve shown you some examples of when it can be appropriate to use HTML, but that decision will always be a judgment call that needs to be made on a case-by-case basis. That said, let’s move on the nitty-gritty of how you actually implement it.

How to Spice up Your Slack Channel with HubotMatthew Wilkin