It’s been a frantic couple of weeks in the browser market. Microsoft released the highly-anticipated Internet Explorer 9.0 on March 15 followed by Mozilla’s release of Firefox 4.0 eight days later. Firefox was downloaded 5.5 million times within 24 hours — more than twice that of IE9. But, Mozilla’s browser can be installed on more operating systems and the number fell short of the 8 million who downloaded v3.0 on day one.

In our poll last May, Firefox remained the web developer’s choice of browser but Chrome had started to encroach on its territory. Can Firefox 4.0 win hearts of developers and users alike?

Firefox is available in more than 70 languages and the desktop browser can be installed on Windows, Mac OS or Linux.

The Windows installer is 11.8MB — 50% larger than the previous version. However, it’s a self-contained file and, effectively, far smaller than the background file downloads required by IE9 and Chrome. Upgrades from v3 are painless and installation should take no more than a minute or two. No reboot is necessary.

Firefox has been overhauled; it looks great and existing users won’t be disorientated by the new interface. The most noticeable changes are the new Firefox button, no menu, and tabs above the navigation bar. Mozilla has undoubtedly copied the best UI elements from other browsers but that’s no bad thing. 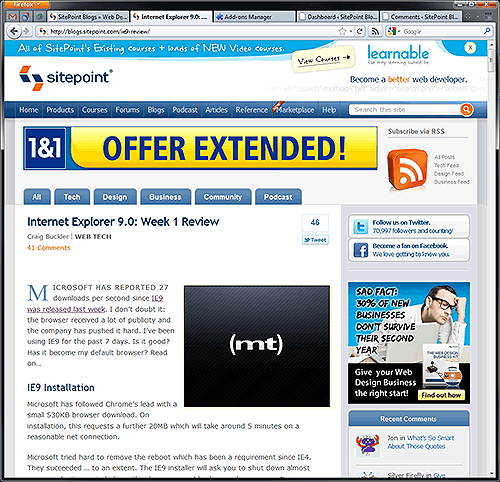 The Opera-like menu button shows provides access to the most-frequently used options but several improvements are evident in Firefox’s implementation: 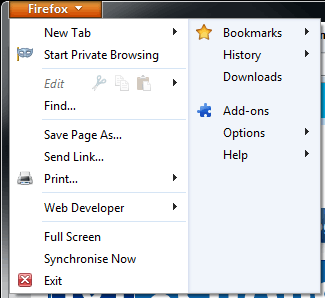 Tab fans will love the new functionality. Firefox implements application tabs: an icon-only tab can be ‘pinned’ to the left side of the bar. However, like Chrome and Opera, you cannot ‘unload’ an App Tab with a middle click — it’ll always reload that page on start-up. Fortunately, some add-ons such as Tab Utilities allow that behavior so the pinned tab remains, but it’s dimmed out and won’t automatically reload.

Panorama allows you to organize tabs into related groups. 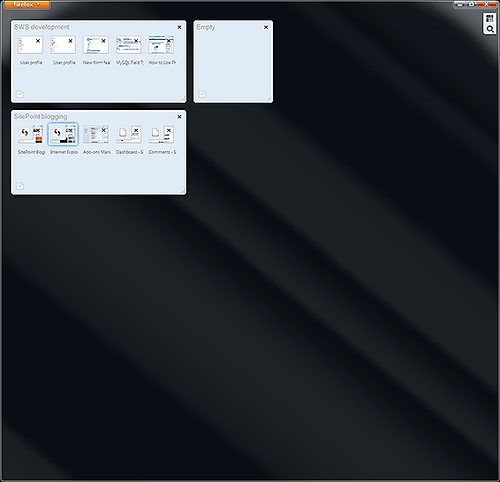 I initially found Panorama a little confusing and buggy when used with Windows 7 taskbar previews. That said, I’m beginning to see the advantages. Opera’s tab stacking is easier to use, but Panorama is more powerful than Speed Dial or an about:tabs page and groups can be hidden until they’re required.

Like its competitors, Mozilla has removed the status bar and you’ll just see a discreet URL at the bottom of the window when hovering over a link. If you have an extension which required it, you’ll need to enable the “Add-on bar” — essentially, a less-functional status bar. Personally, I think Mozilla should have kept the status bar but hidden it by default.

The remaining modal information dialogs have been consigned to the browser bin. For example, JavaScript alert boxes can pop-up on any tab and won’t require your immediate attention.

I also liked Firefox’s new activity indicator. It spins anti-clockwise when connecting, then clockwise when downloading. It’s a nice geeky touch which could also help when debugging connectivity issues.

Finally, if you don’t like the way Firefox looks, almost every part of the UI can be configured. Themes, the background image (personas), bars, icons and tabs can be added, removed and rearranged at will.

Mozilla is in an enviable position: they rarely need to add functionality because their browser supports thousands of third-party add-ons. While other vendors scramble to create decent developer consoles, Mozilla can relax because no one’s managed to beat Firebug.

Amazingly, the majority of good extensions work in Firefox 4.0. I didn’t experience any add-on quirks … although you could. The add-ons manager now appears its own tab: 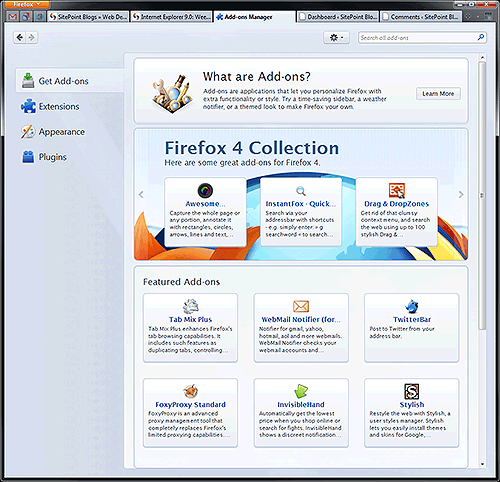 With the exception of UI tweaks, the main new features are:

Like IE9, Mozilla has demoted RSS to a secondary feature. The glowing orange icon has gone, but an RSS button can be added to the toolbar and there are several add-ons which bring back or enhance the functionality.

Firefox 3.x was criticized for its speed. While some problems were caused by add-ons, the browser felt sluggish compared to newer versions of Chrome, Safari, Opera and IE. If you abandoned Firefox for that reason, you’ll be pleased to hear that v4.0 has been radically improved. On my main PC, a cold boot of Firefox 3.6 could take up to 30 seconds — Firefox 4.0 with the same extensions takes just 5 seconds.

If you look around the web, many of the recent benchmarks have been confusing — if not contradictory. In my experience, the performance difference between the top 5 browsers has become almost negligible. Firefox starts a second or two slower than IE9, Chrome and Opera but it’s not enough to cause exasperation. Page rendering and JavaScript performance is good but, although Firefox implements graphics hardware acceleration, it’s not noticeably faster than its competitors.

With regard to memory usage, Firefox 4.0 seems a little more hungry than v3. If you only open a few tabs at a time, IE9, Opera and Chrome normally use fewer resources. However, open a few more, and Firefox’s single process becomes more efficient.

Stability is as good as ever. I experienced a couple of interface rendering quirks, but nothing untoward occurred.

Only the most radical web developer could complain about standards support in Firefox 3.6, but a number of new features have appeared in Gecko 2.0 to help it keep up with advances made by webkit and Presto (Opera):

Mozilla has announced plans to adopt a Chrome-like update schedule so we can expect new technologies to appear rapidly.

If we disregard add-ons for the moment, a naked Firefox provides a basic source viewer, Error Console and a new Web Console. Essentially, the Web Console is a combined log of all net activity, JavaScript and CSS errors which sits at the top of the browser window:

Unlike other consoles, it displays file downloads and errors as they occur: interesting, but rarely essential. Overall, I found the it a little ugly, clunky and slow — especially compared to the other improvements Firefox offers. It could be useful if you had nothing else, but you wouldn’t climb over Firebug to get to the Web Console.

Fortunately, we’re spoiled for choice when it comes to developer tools. Our lives would be far more difficult without Firebug, Web Developer, Console2 and others.

I hope Mozilla continue to provide technical and financial support for these add-ons; they have made Firefox what it is today.

I hadn’t expected to be so impressed by Firefox 4.0. Mozilla has taken the best features from other vendors, improved them, and created a slick, cohesive browser which is easy to use and available on all popular operating systems.

I have no hesitation in recommending v4.0 to existing Firefox users, although you should check essential add-ons are compatible. If you abandoned version 3.x because it was slow, you should also give Firefox 4.0 a try.

In my opinion, Firefox remains the best application for web development but it’s also great for casual browsing and I’m not using other browsers as much as before. If you find IE, Chrome or Safari too limited and Opera too daunting or quirky, Firefox occupies a middle ground that’s ideal for a wide range of users.

Nearly 50 million people have downloaded Firefox 4.0 — you can follow them at getfirefox.com.