The web search integration that we reported was on its way this past July, finally arrived at Facebook this afternoon. Facebook initially rolled out the new feature earlier in the day, only to apparently have a change of heart and roll back the launch, as well as taking down a blog post announcing it. The blog post is back up now at a new URL.

Web search on Facebook is something I have been calling for for over a year (initially at ReadWriteWeb and then here). It’s really a no-brainer for both the social network and Microsoft, who invested $240 million in Facebook just under a year ago. Search is one of the primary activities on the web, along with email and social networking, and it has been the easiest to successfully monetize. Facebook already has major footholds in those other two.

comScore says that Facebook only fields 186 million searches per month, though about 15 months ago, Facebook’s own numbers pegged it at 600 million. Either way, that’s not enough to put much of a dent in Google’s dominant search lead. But remember that currently, searches on Facebook are only for things on Facebook — events, groups, pages, profiles — often times things that outside search engines can’t see. So comparing Facebook’s pre-Live search implementation to general web search is really apples to oranges. MySpace, which already integrates web search, serves 585 million per month — can we expect a jump to a similar level now that Facebook has web search? How many of Facebook’s users would stay on the site to complete web searches if they didn’t have to leave to go to Google? 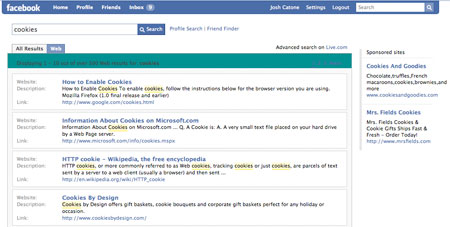 What’s really interesting is that VentureBeat is reporting that Facebook is tweaking Live Search results pages in ways that suggest it is leaning on your social data (such as location, interests, etc.). We didn’t notice that in any of our tests, but that could be a powerful differentiator for folks deciding to stay on Facebook for a web search or travel off site to Google.

Angus Norton, Senior Direct of Live Search at Microsoft, says that the two companies are planning to “explore additional ways to integrate Live Search more deeply into the Facebook experience.” Will that mean the type of social search ideas we discussed two weeks ago?

It might. Said Sebastian Gard, the Viral Marketing Manager in the Digital Experiences team at Live Search Consumer Marketing at Microsoft (they really suck at titling things over there), “Facebook is taking a very thorough approach to how they’re putting Live Search in, however – they’re not just plugging web search in like we’ve seen other social networks do.”

Intriguing. Hopefully the roll out sticks this time!