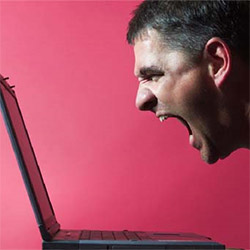 New Zealand accountant Vicki Walker was been sacked for sending “confrontational” emails which broke good etiquette practices by using “shouty” uppercase characters, bold fonts, and red lettering. She was fired in December 2007 following two years employment as a financial controller for ProCare Health. ProCare claimed that she had caused disharmony in the workplace.

ProCare could only offer one message as evidence. The email advised her team how to complete standard staff claim forms and specified dates and times in bold red. Another sentence, written in uppercase, read: “To ensure your staff claim is processed and paid, please do follow the below checklist.”

Despite the bad grammar, Walker commented:

To say that is confrontational is ridiculous.

Fortunately for Ms.Walker, The New Zealand Employment Relations Authority agreed that she had been unfairly dismissed. ProCare did not have a written etiquette guide for employees and failed to issue a formal warning. Ms. Walker has been awarded $17,000 for unreasonable work termination and loss of earnings.

While this is an extreme case (and I suspect ProCare used bad netiquette as an excuse for the sacking), it highlights the problem of internet messaging. Emails never convey the same tone, nuances, or body language as a face-to-face or telephone conversations. No one can see the cheeky smile on your face as you type that mild insult. It’s too easy to inadvertently offend a recipient with a misplaced word.

Email has it’s place, but you should certainly avoid using it as a soapbox for long-winded rambling rants. Stick to short informational messages and you won’t end up in the same situation as Ms Walker.

Have you accidentally insulted someone by email? Does your company have a messaging style or email etiquette guide?