It’s hard to find a great set of iPad apps that you can rely on as a designer amidst the constantly growing App Store, and most articles are filled with irrelevant apps — like social media clients — and apps with duplicate functionality, like three vector apps that all do the same things. In this article, I want to help you narrow it down to just ten insanely useful apps that each fill a specific function in the list, and that will be useful for any web designer. You might have found alternatives that suit your tastes, but for the designer with a new iPad, this should be a great starting point. 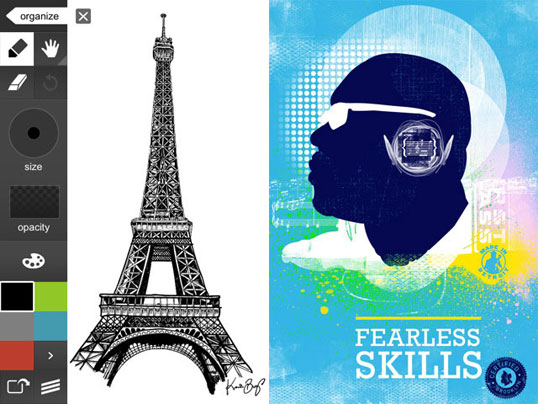 Adobe Ideas is a sketching app for the iPad that allows you to get ideas down while out and about for later reference. It’s at the top of the list because this is probably the most common use case for design work on the iPad — capturing ideas for later. The app lets you configure a palette, work with different brush sizes and opacities, and keeps quite simple. Despite its limitations, some users have done interesting things with it, as you can see in the screenshot. Oddly, after spending $5.99 on the app you’ll need to shell out another $0.99 on an in-app purchase if you want to use layers. Photoshop Express is a handy companion to Ideas that lets you edit photos, from the basic crop, color adjustments and a smattering of novelty effects. It is on the surface a free app, but like Ideas it delivers extra functionality through a $4.99 in-app purchase called the Camera Pack. The Camera Pack introduces noise reduction, a camera timer, and auto review. The app also features sharing functions through Photoshop.com. 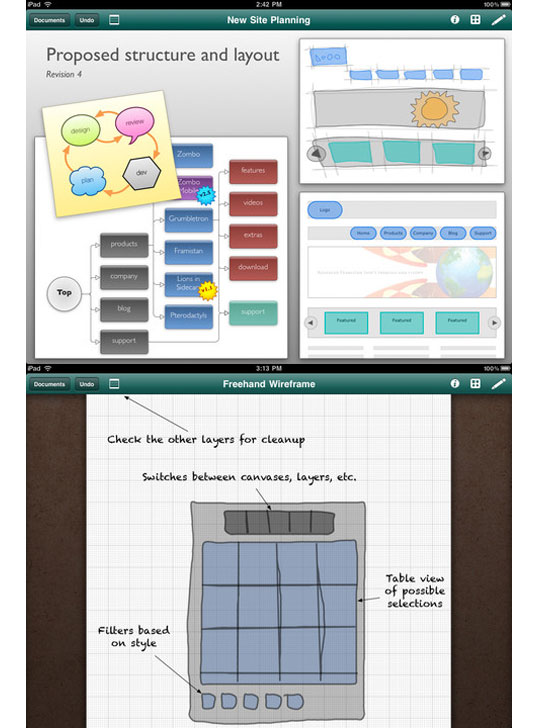 Continuing in the vein of apps that let you flesh out ideas on the iPad for implementation on the computer, OmniGraffle is a great app for wireframing layouts, and developing sitemaps. It is, like most of Omni Group’s iOS apps, a hefty $49.99, but comes highly recommended. If you’re an OmniGraffle for Mac user, you should even be able to use most of your stencil library on the iPad. 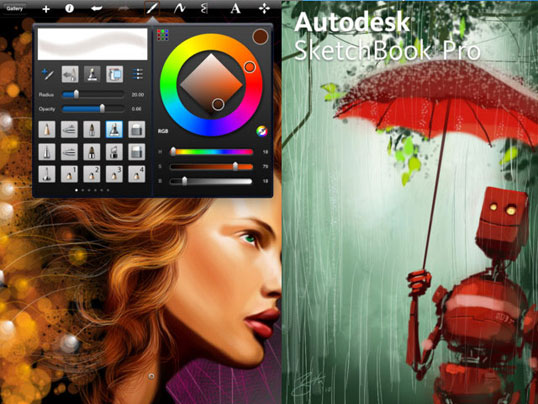 If you want something with some power, SketchBook Pro might be the app to check out. With a quality set of brushes and other tools, including dynamic symmetric drawing, SketchBook is an app that is one of the few apps that is often used to create great art that doesn’t need to be redone ‘for real’ on the computer later. For $4.99 you get up to 12 layers on an iPad 2 at 1024 x 768 pixel resolution, or 4 layers with a 2048 x 1536 pixel resolution. 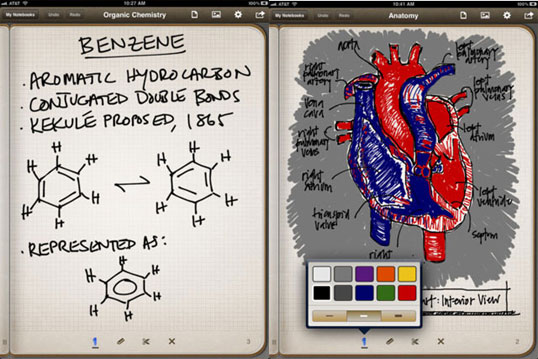 Penultimate is a notebook app, where you can take notes, draw simple sketches, and even include photos, making it a great app for organizing plenty of ideas and even moodboarding. Penultimate is a pretty cheap buy at $1.99 and you can extend it through a variety of in-app purchases that’ll  give you templates for task lists, music paper, and so on. 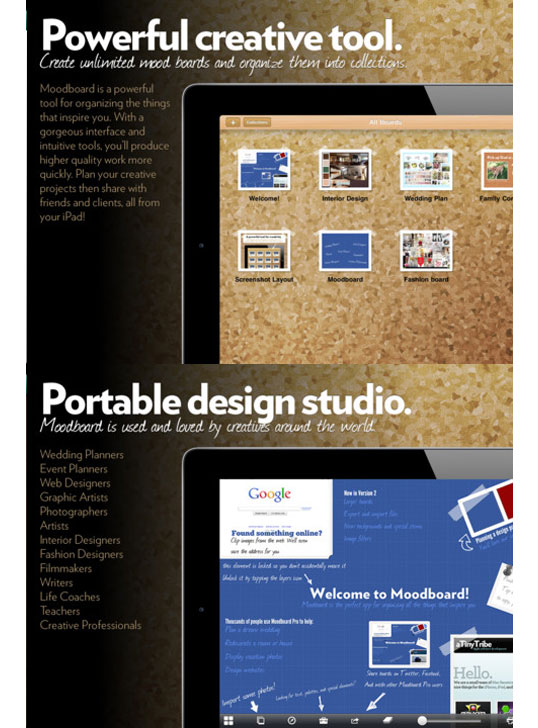 Moodboard, as the name suggests, is an app purely for creating moodboards. These are boards that allow designers to organically build up an aesthetic for their next piece by placing and playing with colors, fonts, images and textures, whether you’re working on a website, a print piece, or the look and feel of an entire brand. Moodboard will run you $9.99. The Font Game won’t help you get any design work done, but it will help you keep up in a room full of more experienced designers. It’s described as a “rapid-fire typeface identifying” game to help you train yourself to identify over 1,000 popular fonts. There’s even a game mode for identify the elements of type, such as ascenders and inclined stems. The Font Game is $1.99. This collection wouldn’t be complete without a vector app, and iDraw fills that role. For $8.99 you can use vectors to create illustrations, or even get diagramming if OmniGraffle’s price is a bit too rich for your tastes. iDraw uses Dropbox integration and SVG import and export to ensure you can use your desktop assets to design with on your iPad. 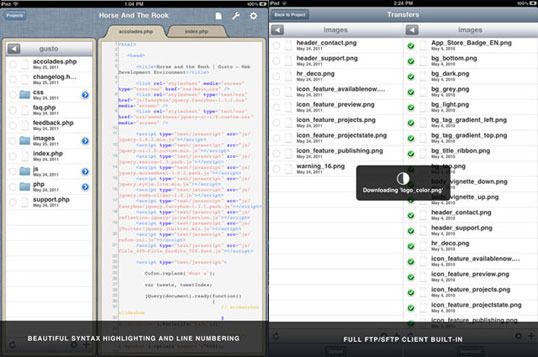 There’s nothing more annoying than realizing there’s a bug on a site you’ve designed while you’re away from a computer and helpless to do anything about it. It’ll probably remain a nagging distraction in your mind until you get back to the office. Fortunately, getting connected to FTP and making changes to your code is simple with Gusto, which costs $9.99 and comes with all the bells and whistles like tabs for working on multiple files and syntax color coding. I don’t know many designers who can resist the urge to check out how traffic to their sites is doing each day. There are free Google Analytics apps for the iPad out there, but I haven’t found one that doesn’t suck — so the reasonably priced $6.99 Analytics HD is a great buy to round out your collection of iOS apps for designers. A lot of these apps allow access to a limited subset of your Google Analytics data, but with this one you can access just about any data available in the web app itself. It’s also great for meetings with clients since it can turn your data into great full screen charts.

Have we missed out your favorite design-related iPad app? Found a great design-related use for the iPad’s smaller sibling, the iPhone? Let us know about it in the comments. 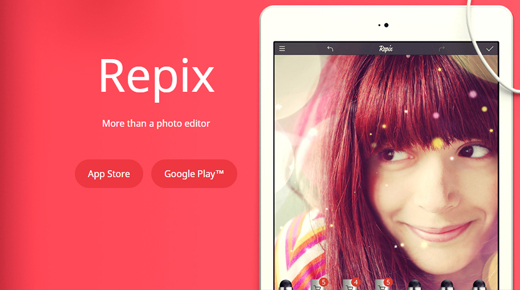 How to Build iPad Apps with Xcode and Interface BuilderJack Herrington