Developing a relationship with an application is usually slow process and with really good software, it probably never really ends.

Opening the Dreamweaver 8 box for the first time a few months ago was all about ‘how different is it?‘ and ‘gee, I hope they haven’t broken it‘. I may well have a serious lack of imagination, but at this stage it always seems to me that the old version was perfectly good, and surely they could only wreck it from here? Sometimes I’m right, but this one seemed pretty good from the start.

Although it’s been almost ignored in most feature listings, ‘FTP in background’ was the feature that actually impressed me the most. I’ve got three, shiny, fingertip-sized indents in my keyboard from waiting in upload limbo.

Not long after I got to proof-read the final edits of Rachel’s Dreamweaver 8 ‘tour-de-force’ (still Word docs at that stage) and started to get a more serious appreciation for the improvements in the version 8. Thankfully Macromedia devoted most of their development attention to the areas that needed it most — namely CSS-centric design tools, standards and accessibility, while throwing in some nice code view improvements.

But is it all grindstones and productivity gains down the Dreamweaver labs?

Of course it isn’t! The Macromedia boys know how to have fun.

If you have Dreamweaver, and you’re feeling a bit crazy on Monday morning, try this.

If you don’t use Dreamweaver, watch the demo below. 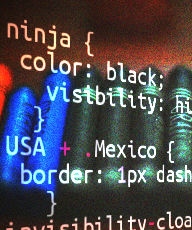