The hottest topic at last month’s Web Directions @media was the mobile web. Almost every speaker had something to say, but two of the most notable were John Resig and Jonathan Stark. 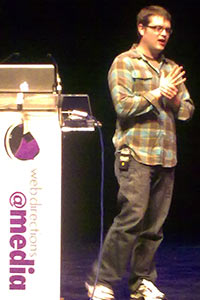 Has jQuery saved your sanity? This is the man to thank.

jQuery author and JavaScript guru John Resig spent an hour discussing his experiences, joys and frustrations developing for mobile platforms. The good news is that mobile browsers are becoming viable platforms — they’re not there yet, but should be within 3 years.

For this reason, it’s been necessary to obtain platform usage statistics. This has been far tougher than John expected: 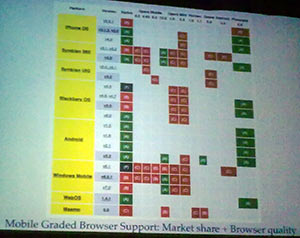 And you thought testing half a dozen desktop browsers was tough!…

As a rough guide, the mobile market is an inverse of the desktop with Opera at the top and Firefox and IE at the bottom. Unfortunately, if you hate desktop browser testing, you certainly won’t enjoy developing mobile web applications. There are far more browsers, the capabilities vary immensely and the testing process is complicated. John’s browser test grid is scary!

Mobile simulators can help … when they’re available. Unfortunately, the availability and quality of emulators varies significantly. Pick of the bunch are the Opera Mini / Mobile emulators and remote debugging with DragonFly.

However, John noted that few of the emulators are accurate and they are no substitute for testing your application on a real mobile phone. Here’s where it gets expensive: to purchase a collection of A-grade mobiles such as the iPhone, iPad, Nokia N97, Palm Pre, and Androids, it will cost around $2,500. That cost doubles if you want to test B-grade browsers.

Jonathan’s excellent presentation started by reminding us how huge the mobile market had become:

When building a mobile application, Jonathan recommends developers carefully consider their goals and target market before choosing a technology:

However, Jonathan considers web applications to be the most cost-effective to produce, most standardized and the easiest to distribute. Libraries such as jQTouch (which Jonathan now maintains) make this process far simpler and he proceeded to create a iPhone application with offline functionality. Impressive stuff for a 20 minute demonstration.

Finally, Jonathan praised PhoneGap — an open source project which allows developers to build native applications for multiple devices using web technologies. It could provide the benefits of both the native and web app worlds.

Jonathan’s slides are available online and you can also read his SitePoint interview.

Coming in the next Web Directions Reflections post: Bruce Lawson is lost for words and Remy Sharp eats HTML5 for dinner…