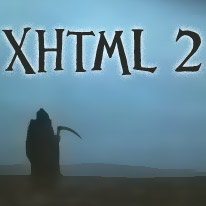 The W3C has announced that XHTML 2 will be dropped when the Working Group’s charter expires on 31 December 2009.

The first W3C XHTML 2 draft specification appeared in 2002 and it was last updated in 2006. The project was an ambitious re-working of the language of the web. It sought to address the inconsistencies, banish obvious presentational tags, and implement clear and concise mark-up. Some concepts were excellent, e.g.

Several XHTML 2 recommendations have have been ported to the HTML 5 specification.

Unfortunately, XHTML 2 was possibly too revolutionary. It was too different, too strict, offered little backward-compatibility, and was criticized for not supporting real-world coding practices. The specification was never completed (few are) and no major browser vendor made a serious attempt to implement the standard (IE still does not support any flavor of XHTML served as XML).

How will this announcement affect XHTML developers? It won’t — not unless you have been developing XHTML 2 solutions in the faint hope of eventual browser support. XHTML 1.0 and 1.1 are still an implemented standard in most browsers and XHTML 5 will support the strict syntax, lowercase tags, and trailing slashes you want to use.

The death of XHTML 2 has one major benefit: additional resources can be allocated to HTML 5. Browser vendors and developers can now work toward a single unified specification. We hope.