Following Microsoft’s legal agreement with the EU Commission, all European Internet Explorer users will be offered a choice of competing browsers on or shortly after March 1, 2010.

The “Browser Choice” screen (thankfully renamed from “Browser Ballot”) is appearing a couple of weeks ahead of the agreed schedule and testing has already started in the UK, France and Belgium. Microsoft has revealed the following details about the update:

1. The Browser Choice screen will be offered in Windows XP, Vista and 7 to users who have IE set as their default browser. It will be installed through the standard automatic update system.

2. Following installation, a new “Browser Choice” icon will appear on the desktop and the IE icon will be unpinned from the Windows 7 taskbar. An introduction screen will appear which explains what a browser is: 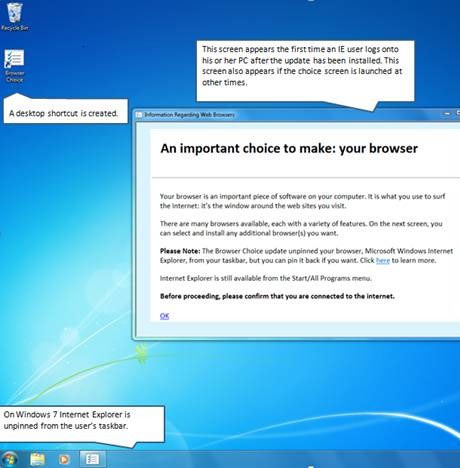 3. The user can opt to select later or proceed to the browser choice screen: 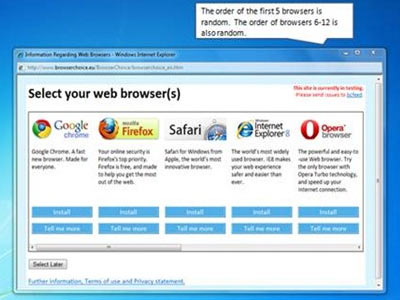 The five most popular browsers are shown in random order — IE, Firefox, Chrome, Safari and Opera. A further 7 randomly-ordered browsers are available if the user moves the horizontal scroll bar.

4. The system can download and install any number of browsers.

Here’s the best bit: IE6 and IE7 users will be prompted to upgrade to IE8!

There’s one obvious loser: the browser choice screen is guaranteed to reduce IE’s market share. Fortunately for Microsoft, anyone uncertain by their choice will be reassured by that big blue ‘e’ icon.

Firefox is perhaps the most familiar and already has a healthy 40% market share throughout Europe. It has the potential to overtake IE’s 45% of the market.

Google Chrome usage is growing steadily and the company has been heavily advertising their browser in newspapers and on billboards. Many people will recognize the logo and the Google name could make it a big winner.

Windows users who also have a Mac or an iPhone may be tempted to pick Safari. However, Apple don’t seem overly concerned about promoting their browser on Windows.

Ironically, Opera — who instigated the anti-trust case — may not experience a significant rise. According to the StatCounter European statistics, its usage has halved from a peak of almost 9% in June 2009. It seems likely that Chrome and Safari have eaten into its market share. I also doubt the Opera name and logo will tempt many users when they’re faced with the choices.

It will be interesting to see how the browser market is affected in the following months.

Is IE your default browser? No — seriously?!! Will you be tempted to try an alternative browser when faced with the choice screen?

Flight is the Right Choice for Your Existing WebsiteAndrew Krespanis