The model-view-controller (MVC) architecture that we first encountered in Chapter 1, Introducing Ruby on Rails is not unique to Rails. In fact, it pre-dates both Rails and the Ruby language by many years. However, Rails really takes the idea of separating an application’s data, user interface, and control logic to a whole new level.

Let’s take a look at the concepts behind building an application using the MVC architecture. Once we have the theory in place, we’ll see how it translates to our Rails code.

MVC is a pattern for the architecture of a software application. It separates an application into the following three components:

This separation results in user requests being processed as follows:

This process is illustrated in Figure 4.3.

Figure 4.3. Processing a page request in an MVC architecture

Separating a software application into these three distinct components is a good idea for a number of reasons, including the following:

If you haven’t quite got your head around the concept of MVC yet, don’t worry. For now, the important thing is to remember that your Rails application is separated into three distinct components. Jump back to Figure 4.3 if you need to refer to it later on.

Rails implements the concept that models, views, and controllers should be kept quite separate by storing the code for each of these elements as separate files, in separate directories. 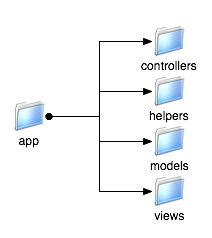 This is where the Rails directory structure that we created back in Chapter 2, Getting Started comes into play. The time has come for us to poke around a bit within that structure. If you take a look inside the app directory, which is depicted in Figure 4.4, you’ll see some folders whose names might be starting to sound familiar.

As you can see, each component of the model-view-controller architecture has its place within the app subdirectory — the models, views, and controllers subdirectories, respectively. (We’ll talk about that helpers directory in Chapter 6, Helpers, Forms, and Layouts.)

This separation continues within the code that comprises the framework itself. The classes that form the core functionality of Rails reside within the following modules:

Let’s take a closer look at each of these components in turn.

ActiveRecord is designed to handle all of an application’s tasks that relate to the database, including:

It also has a few other neat tricks up its sleeve. Let’s look at some of them now.

ActiveRecord ships with a large number of database adapters to connect to a variety of popular database server packages, such as MySQL, PostgreSQL, Oracle, and Microsoft SQL Server.

Examples of code that differs greatly between vendors, and which ActiveRecord abstracts, include:

Before I can show you the magic of ActiveRecord in action, though, we need to do a little housekeeping.