Internet Explorer 9’s new interface has been revealed following an article published on a site run by one of Microsoft’s Russian subsidiaries. The screenshot was removed almost immediately, but it was too late — the image quickly dispersed throughout the web: 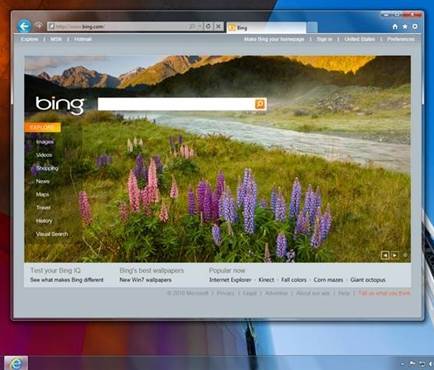 Microsoft has refused to publicly comment about the leak but, if it’s a fake, it’s very good one.

The screenshot shows a minimalistic user interface reminiscent of those implemented by Chrome, Opera and Firefox 4. However, the style and layout of the back/next buttons, address bar and icons will be recognizable to IE8 fans (I’m sure they must exist somewhere?)

All the controls have moved to a single toolbar. It doesn’t leave much room for multiple tabs but it maximizes the web page viewing space. I’m surprised tabs haven’t been moved to the empty title bar area — Mozilla recently determined that tabs above the address bar is a more logical layout.

The Russian website also revealed IE9 would offer a unified search/address bar, a simplified set of toolbar icons, and tear-off tabs which can be snapped to a part of the screen. Windows 7 already offers this last option as “Aero Snap” so it may not be a feature implemented directly within the browser.

The IE9 beta will be released on September 15 2010 so we’ll soon know whether the leaked screenshot is real or not. The final version is unlikely to appear until 2011 so the interface may undergo radical changes before then.

Of course, it could be a Microsoft publicity stunt to raise awareness of the browser. I somehow doubt that — it’s been far more successful than many of their real campaigns! (Did anyone actually attend a Windows 7 party?)

What do you think? Is the screenshot real or fake? Do you like it?