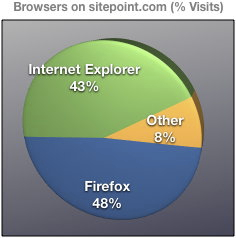 The Microsoft Internet Explorer Weblog has announced that the latest update to Internet Explorer 7 will drop the Windows Genuine Advantage (WGA) validation step from the installer. Although the announcement stops just shy of saying it, the real effect of this move is to allow people running pirated versions of Windows XP and Windows Server 2003 to get the IE7 upgrade.

How successful has this been? Well, let’s look at the browser stats for sitepoint.com. As you’d expect, there is a high percentage of Firefox users (48%) in the site’s audience, reflecting the number of web developers that use it as their primary browser. Nevertheless, Internet Explorer is still responsible for 43% of the visits to sitepoint.com in the past month. 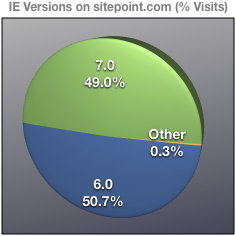 It turns out, however, that only half of those visits are made by people running Internet Explorer 7. In other words, one in five visits to sitepoint.com is made by someone who uses Internet Explorer 6.0 as his or her primary browser.

What Microsoft seems to be betting on is that a good number of those IE 6 users have not been able to upgrade to IE 7 because they are running pirated copies of Windows (a factor, incidentally, which may also have driven many new users to Firefox).

Other reasons users may have chosen to forego the IE 7 update is that they are subject to corporate IT policies that are slow to adopt upgrades like these, or that they’re running pre-Service Pack 2 versions of Windows XP that don’t support IE 7 (SP2 itself will not install on pirated Windows XP systems).

And of course there are users who simply preferred IE 6’s user interface. As a nod in their direction, Microsoft has made the traditional menu bar visible by default with the latest IE 7 update, addressing one of the most common complaints of first-time IE 7 users.

Do you know a stubborn IE 6 user? Will this latest update get them over the line? In not, what do you think Microsoft would really have to do to get these users onto IE 7?