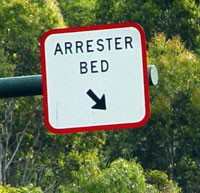 We can learn a lot about designing usable web sites from the offline world.

For instance, when I was in Adelaide a couple of weeks ago visiting family, I took a drive around the Adelaide Hills. Cruising along the freeway at 120 kms/hr, I passed the sign in the picture on the right. The first thing that popped into my head was “What the heck does that mean?”

I’m not sure what it’s like in your part of the world, but when I was last living in Adelaide, South Australia, the term arrester bed definitely wasn’t common language.

(I was half expecting to see an intimidating king-size mattress in full police uniform step out from the bushes and order me to pull over.)

The second thing that popped into my head — and this is possibly an indication that I spend far too much time online — was this:

“Imagine if something similarly obscure was used to describe a tab on a web site. No-one would know what the text linked to!”

Steve Krug wrote about this very concept — that we should think of our users as driving by in a car, and provide them with navigation labels that are quick to digest. However it’s obvious that we shouldn’t use every billboard that we come across as inspiration.

The moral of this story is that, when deciding upon the words to use for your navigation items, it’s really important to use language that your audience knows and understands immediately, without them having to delve deep into the limits of their vocabulary and figure it out. Exactly what that language is depends on your site and your audience — if your site is for teens, then it may be perfectly acceptable to call the link for your Contact Us page “Write Us, Yo”. For most sites, however, you’re better off sticking with the much safer Contact or Contact Us.

PS. I found out later that an arrester bed is in fact an emergency ramp, available for drivers of vehicles (usually trucks) whose brakes have failed. The ramp provides a safer way of coming to a stop than the barrier gate or a tree. It may be an American term; personally, I’d have preferred to see it called “Emergency Safety Ramp”. In the heat of the moment, that’s going to require less brain power on the driver’s behalf, thus potentially saving more lives.