WHAT'S IN THIS CHAPTER?

The choice of the editor used by any developer is an incredibly personal one. The reason to pick one over the rest depends on a collection of attributes typically related to the tasks they perform on a daily basis. Developers look for functionality, keystroke shortcuts, code snippets, colorations, and more that allow them to stay productive.

Dislodging developers from their choice is not easy. Any change in editors is going to result in an immediate loss of productivity. After all, it takes time to become familiar with the features offered and have them become a natural part of the coding “flow.” As a result, it takes a special level of “better” for a developer to switch editors.

For this reason, the success of Visual Studio Code speaks volumes for its features and functionality. Although it has been officially released for just three years (it left public preview in April 2016), it has quickly become one of the top editors in terms of popularity, competing with Sublime Text, Atom, and UltraEdit for the top spot.

But that doesn't matter to you, the reader. What you care about more is what Visual Studio Code can do to help you be productive. As a developer, it is frequently the small things that make the biggest difference—knowing how to add code with a single keyboard chord, being able to do client and server debugging on your Node.js project, or language‐sensitive code completion. Any, all, or none of those might matter, but the goal of this book is to help you find the five or ten features that matter to you and that will make you excited to use Visual Studio Code.

Visual Studio Code is a cross‐platform editor. In this instance, cross‐platform means that a version is available to run on Windows (7, 8, and 10), macOS, and Linux. The installation process is similar for each, and the starting point is the same in all cases: https://code.visualstudio.com/Download. Figure 1-1 shows what the download page looks like presently, but it's naturally subject to change. 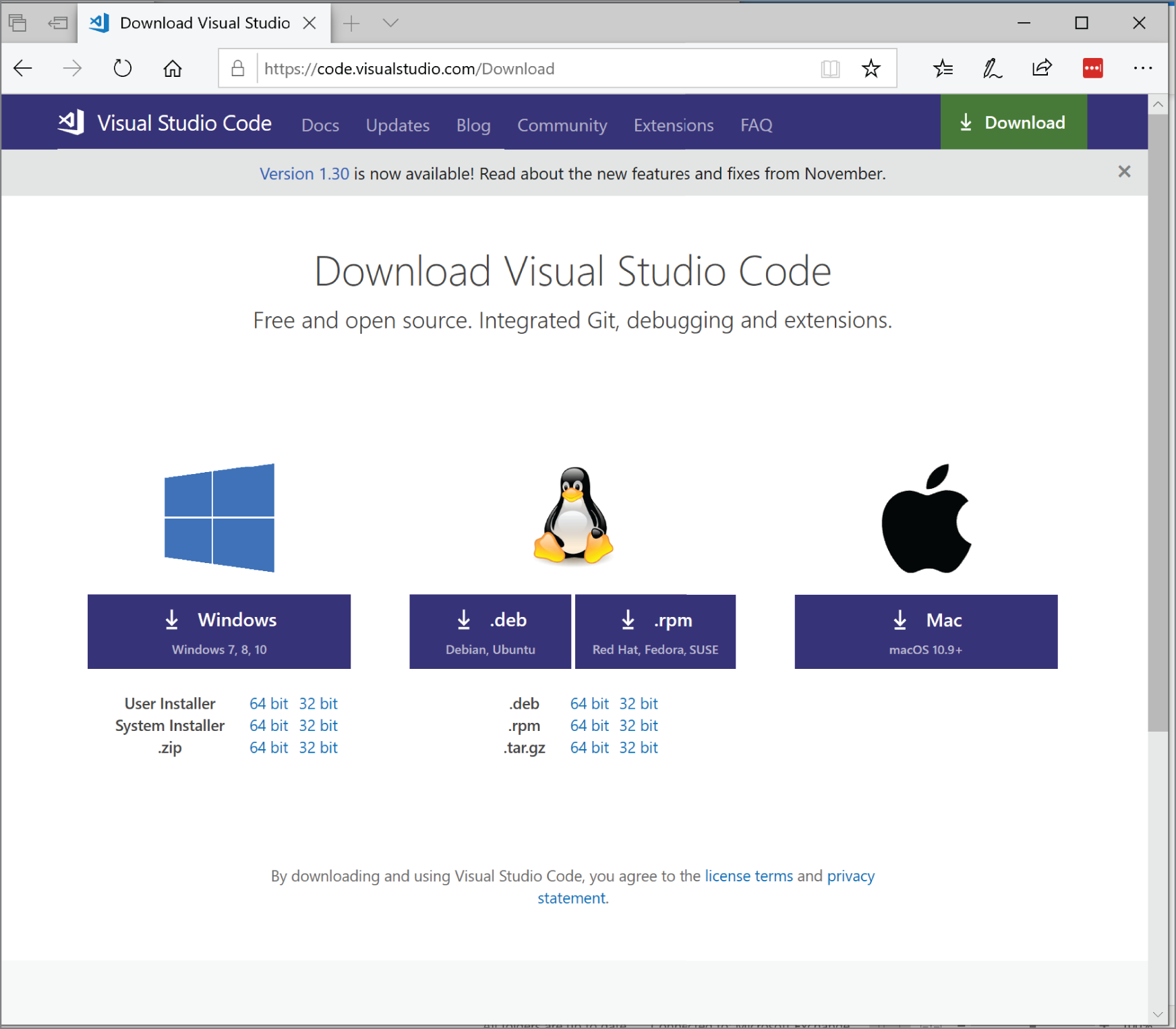 The most efficient starting point for a Windows installation is to download the desired installer. You have six possible options—three different installers each of which is available in 32‐bit and 64‐bit formats, divided along two separate attributes. First, you can choose from three installer types—System, User, and Zip: 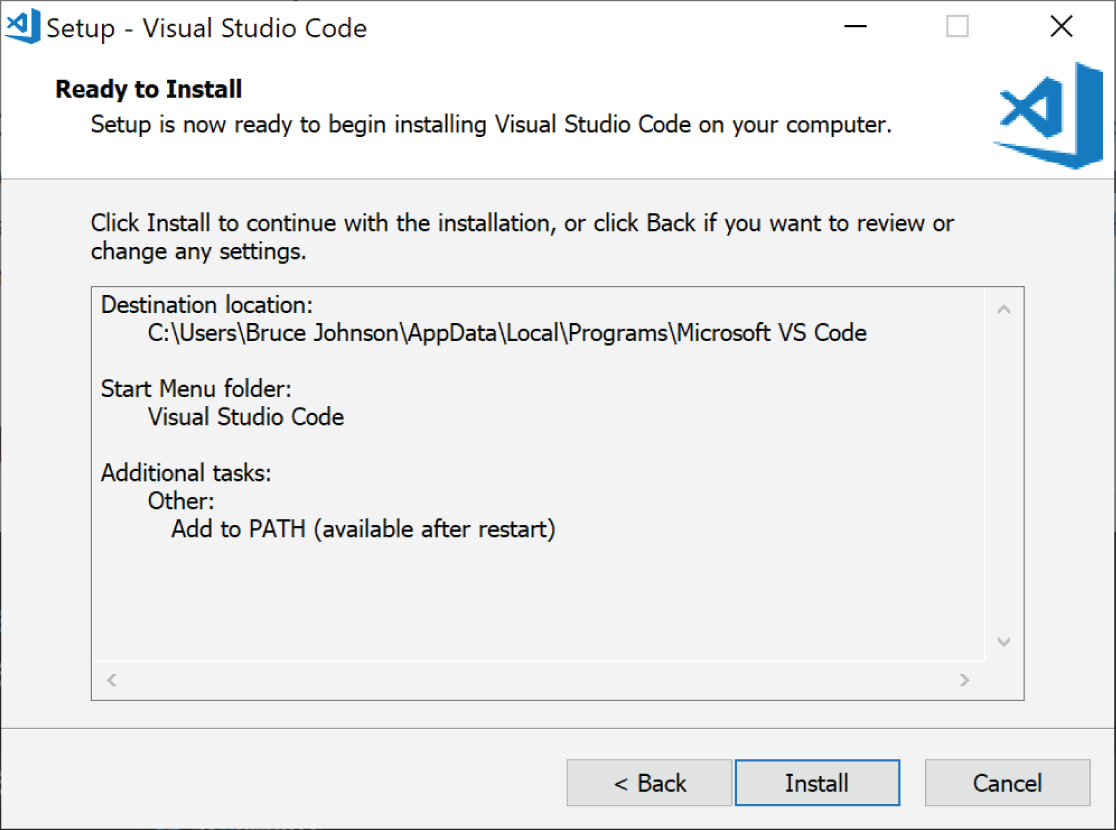 The basic steps involved with installing Visual Studio Code on Linux are the same regardless of the distribution you are using:

However, the specifics within each of these steps do depend on your distribution. The precise instructions for a number of different distributions are described in the following sections.

All of the figures in this section were captured from within Ubuntu, so you might see something slightly different in your own environment. Also, be aware that you need to have a desktop installed in your Linux environment in order to run Visual Studio Code.

The installation flow for Ubuntu or Debian is quite similar to Windows or macOS:

At this point, Visual Studio Code should be ready to go. Execute code from within Terminal to launch the application (see Figure 1-8). 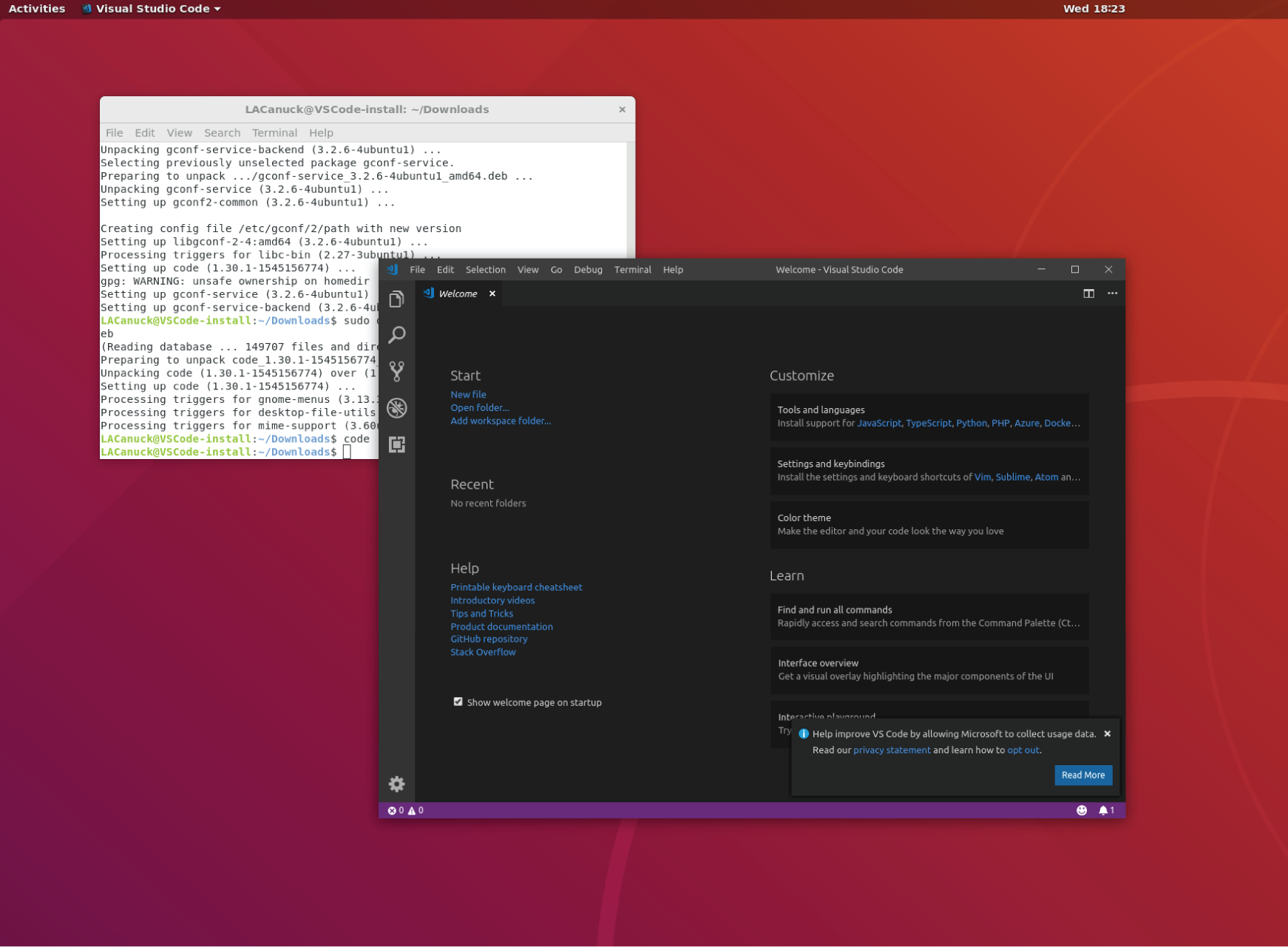 A YUM (Yellowdog Updater, Modified) repository is a storehouse of RPM (Red Hat Package Manager) files. The purpose of the repository is to provide a simple mechanism through which software can be installed, dependencies resolved, and updates delivered. It's conceptually the same as NuGet or NPM (Node Package Manager).

To install the key and the YUM repository, execute the following commands on your Linux machine:

The first command imports the key to the repository into your environment. The second adds the Microsoft repository as a recognized YUM repository. This is accomplished by creating a file (called vscode.repo) and putting it in the /etc/yum.repos.d directory.

Once this is done, you can update the YUM package cache by executing the following command:

When the command is finished, Visual Studio Code is ready to run.

Microsoft uses a manual signing process for the package placed in the YUM repository. As a result, the system that is used to publish Visual Studio Code is not able to deliver an updated package at the same time as it is delivered to other distribution points (like the Visual Studio Code website); there might be a delay between updates being available on other platforms and in the YUM repository.

For these distributions, the YUM repository is the best choice for getting Visual Studio Code. What differs are the commands that need to be executed. The following commands install the key and repository:

These next two commands will update the package cache and install Visual Studio Code:

Another package manager that is occasionally found in the Linux world is Nix. Although Microsoft doesn't maintain a Nix package, a community‐managed version is available at https://github.com/NixOS/nixpkgs/blob/master/pkgs/applications/editors/vscode/vscode.nix.

To install Visual Studio Code using Nix, set the allowUnfree option in your config.nix file to true. Then execute the following command: 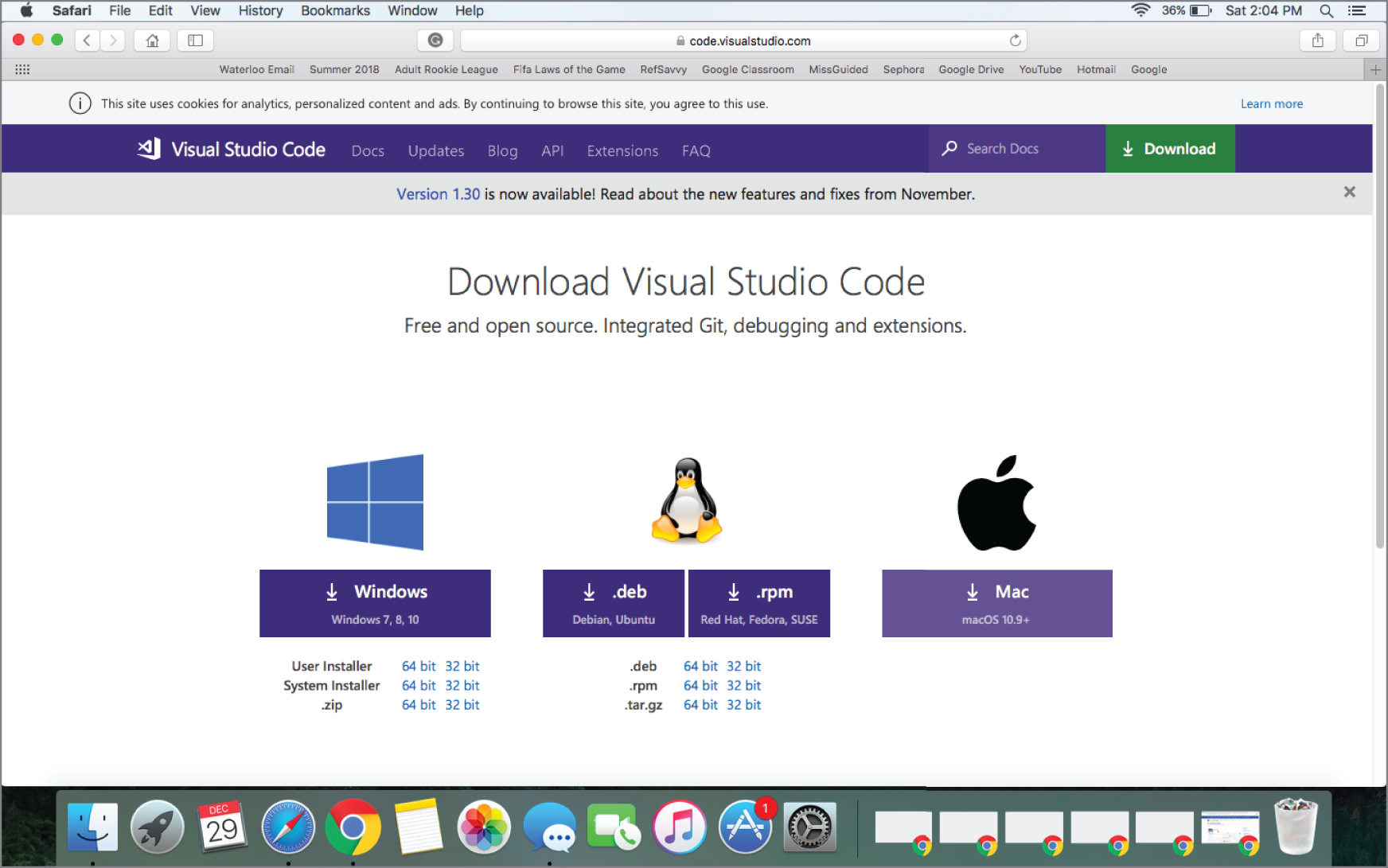 Click the Mac option on the right‐hand side to start the download. When it has finished, open the download section on your browser and open the downloaded file. You will be greeted with a warning message indicating that the file you're trying to open came from the Internet (Figure 1-10).

If you want to add Visual Studio Code to your dock, right‐click the icon and choose Options ➣ Keep In Dock (Figure 1-11). 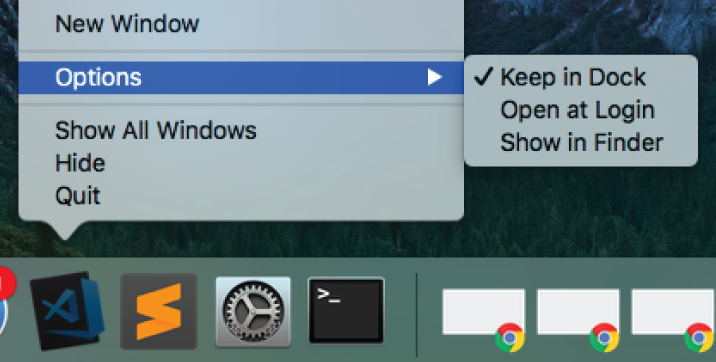 If you upgrade to macOS Mojave after installing Visual Studio Code, it's possible that you might start seeing dialogs suggesting that Visual Studio Code needs to access some common file locations. Specifically, you might see any or all of calendar, photos, and contacts in the dialog. These dialogs were a security addition to Mojave and, as such, are not specific to Visual Studio Code. Running other applications might generate the same dialogs. You are safe to answer Don't Allow to these requests. There is no need for Visual Studio Code to access these folders and there will be no impact on any functionality if you deny the request.

Although it is not essential to being able to use Visual Studio Code, it is instructive to understand the underpinnings that allow it to work across the disparate platforms that it supports. That is especially true if you have any thoughts about trying to create extensions for Visual Studio Code, a topic that is covered in Chapter 10, “Creating Your Own Extensions.”

First, Visual Studio Code is an open‐source project. This means that the source code is readily available for anyone to look at. Or even contribute to, if you have the desire. You can find the source at https://github.com/Microsoft/vscode.

Visual Studio Code is based on a framework called Electron. Electron was designed to allow for the creation of desktop applications using the front‐ and backend components of a web application. On the frontend side, JavaScript, HTML, and CSS are used to create the user interface functionality. The interface is rendered using Chromium.

Chromium is an open‐source web browser project that is headed by Google. It is the foundation on which Chrome is built and will also be the basis for future versions of Microsoft's Edge.

On the backend, Node.js is used to serve the user interface component and provide any additional functionality. This combination of technologies allows it to run on the desktop of three major platforms: Windows, macOS, and Linux.

Electron was originally created by GitHub and, ostensibly, its primary purpose was to support the Atom text editor. But its usage didn't stop there. It is currently used in a wide variety of applications, ranging from integrated development environments (IDEs) to music players to games.

Additional common functionality is implemented through a number of other channels. For example, colorization is provided through Monarch, a library that allows you to specify a syntax highlighter using a declarative syntax. What's even better is that the syntax is expressed using JSON, something that is likely to be familiar to most web developers.

As another example, language‐specific functionality, like auto‐completion, formatting, and diagnostics, are implemented in a separate language server. This server runs in a process separate from Visual Studio Code, the goal being to minimize any impact on the IDE that performing continual lexographical analysis could have. Visual Studio Code communicates with these servers (there is typically one for each language you are editing) using the Language Server Protocol (LSP).

You've seen how to install Visual Studio Code on the different operating systems that it supports. Once the application is ready, the user experience is very consistent across the platforms. That has to do with how Visual Studio Code was built (that is, on the Electron platform).

In subsequent chapters, you'll learn how to customize the IDE to more closely fit your own working style. You'll also see how Visual Studio Code works hard to make your development process easier and faster.