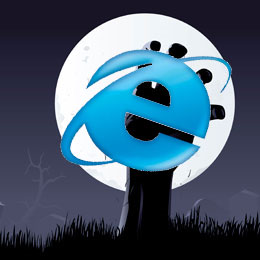 Although major web sites such as YouTube are dropping support for IE6, as Alex has pointed out, progress is far more sedate within large corporations and public authorities. Here are two further alarming examples…

Our first case study is Orange — a major telecoms and Internet Service Provider. According to a technician working in one of the UK’s call centers, up to a quarter of personnel had switched to Firefox primarily to take advantage of tabbed browsing and improved performance. However, a leaked internal email revealed that the company has banned Firefox in favor of IE6. Staff have also been threatened with a £250 fine if they experience PC problems following the installation of any unauthorized software:

Under no circumstances should Firefox be downloaded. Downloading any application from the internet is against Orange policy. There is NO support for Firefox in the operational environment. Orange Web applications are all designed to run on IE6 and therefore there is a likelihood that functionality will be impaired on Firefox.

Orange’s primary reasons are corporate PC stability and security. IE6 is automatically updated as part of the company’s patching process whereas Firefox and other browsers are not. That is an important factor, but is a patched 8-year-old browser really more stable and secure than a more modern version?

The majority of UK Government departments still force staff to use IE6 but most have plans to adopt IE7 by 2010 (better late than never, I suppose). The exception is the MoD. Although they have more stringent security concerns than other departments, it has not prevented them rolling out a “secure” IE6-based Information Infrastructure Program to 300,000 users worldwide.

Many civil servants use web browsers as a tool of their trade. They’re as important as pens and paper. So to force them to use the most decrepit browser in the world is a rare form of workplace cruelty that should be stopped.

The Government Get Safe Online initiative advises companies to upgrade from IE6, so permanent secretaries should practice what they preach. Why civil servants should not be given the choice to use Firefox or Chrome or Safari is beyond me. UK web workers deserve better.

You may consider these organizations to be luddites, backward, or uninformed. Unfortunately, they employ thousands of people who may be customers for your goods and services. Should those users be disregarded because they continue to use IE6 though no fault of their own?

And You Thought Responsive Text Was Just a Fad?Richa Jain