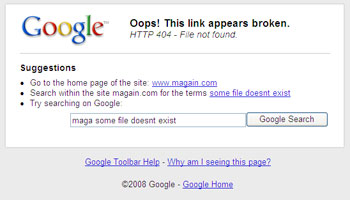 A new feature thrown into the beta 5 release of the Google Toolbar for IE — ignoring a site’s 404 page and displaying its own File Not Found page (with links and a Google search bar, of course) — is causing plenty of bloggers to cry foul.

Google’s Matt Cutts has gone into “it’s OK, we’re just helping” mode, clarifying that Google’s version of the File Not Found page only kicks in if the site’s 404 page displayed is smaller than 512 bytes (an assumption that is supposedly intended to target default pages only). Of course, it’s entirely plausible that a custom 404 page just doesn’t use much markup, which in Google’s eyes, means it’s not worthy for display.

Yes this is a setting that users can turn off, and yes the user can choose just to uninstall the toolbar altogether. But on the other hand, this is a setting that is turned on by default, and is a very popular piece of software with a huge user base — should the fact that I keep my markup lean result in my 404 page being overwritten (for those users) with Google’s opinion of what they should see? It’s one thing to add features to a browser and extend its functionality — it’s another thing entirely to display a completely different page to the one served up.

A poll conducted by TechCrunch revealed that, not surprisingly, 73% of readers disagreed with Google’s stance on this issue.

It might not be evil, but it’s certainly a hugely grey area.

3 Things (Almost) No One Knows About CSSKevin Yank