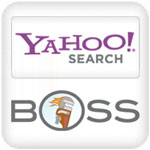 Yahoo! today pushed out a major update to its Build Your Own Search Service (BOSS). While the press has been mainly focused on the new pricing for search engines that generate over 10,000 queries to the API per day, the most important parts of the announcement are the new availability of semantic markup data in the BOSS API, and the open monetization model.

First, Yahoo! announced that it is adding access to the structured data gathered by its SearchMonkey service to developers via the BOSS API. That means that developers can now use BOSS to build their own semantic search engines. For example, searches for an athlete can return not just web sites about that player, but also statistics, biographical information, news, records, etc. That possibilities for the types of search mashups that can be built on top of all that structured data are endless and fairly exciting.

Yahoo! also announced a new pricing model for high volume BOSS users. That’s not overly surprising, and likely won’t affect many users of their site search program announced in November. (And if your site search is generating over 10,000 queries per day, you can probably afford to cough up a little cash.)

What is actually surprising, is that Yahoo! announced an open monetization policy that will allow developers to put third party advertising on search. “Effective immediately, we have changed our terms of service to allow developers to use third party monetization platforms (ad-based or otherwise),” wrote BOSS team member Ashim Chhabra on the Yahoo! search blog. “For obvious reasons monetization is critical to the BOSS ecosystem, so to provide as many opportunities as possible we have decided to adjust our terms to provide developers with more flexibility.”

In July, we actually speculated that BOSS might end up making Google money, even if it manages to put a dent in their market share. At the time, Yahoo! hadn’t yet revealed how they planned to let developers monetize their BOSS creations, and we theorized that, “If Yahoo! allows developers to monetize search results however they please, then more verticals could wind up being a win for Google anyway.”

By December, it seemed like that notion had gone by the wayside. With BOSS generating over 10 million queries per day, Yahoo! said that monetization would come via Yahoo! controlled channels. However, it appears that Yahoo! has had a change of heart and Google AdSense for Search will indeed be a monetization possibility. That means that BOSS could be a win for Google, as well as for Yahoo!

Yahoo! BOSS is a smart strategy for the company. They haven’t been able to compete with Google with their own ranking and display algorithms for search, so opening their index and letting others give it a try is a good idea. As we wrote in July, “If anyone touches on anything so revolutionary that users start to choose it over Google, Yahoo! will be in the best position to acquire whatever it is because it will already use their index and back end technology.”

In the meantime, BOSS is generating tens of millions of new search queries every day for Yahoo! that could make them money in two ways — via developers that choose Yahoo! technologies to monetize search results, and via high volume developers who have to pay for usage.