There have been well over a quarter of a million layoffs in the tech industry since August in the United States. At America’s 500 top companies, there have been 360,000 jobs cut since November. Clearly, times are tough. That could actually be good news for social networks, though, as long as they can keep the lights on until the good times start to roll again. The reason? One word: escapism.

According to the Wall Street Journal, Americans are spending more time online on entertainment sites as the job market fizzles. The reason, the Journal speculates, is that as people lose their jobs they turn to forms of cheap entertainment, such as online games and multimedia sites, as a way to escape. They also turn social networking sites as a way to network and find jobs, reconnect with old friends, and commiserate with others in the same situation.

“Internet games, gambling and other forms of online entertainment have seen significant surges in use in the several months since the economic downturn deepened,” says the Journals Nick Wingfield and Pui-Wing Tam. “Social-networking services like Facebook, blogs and discussion forums — all well-known time sinks even during good times — are also seeing strong growth. Some purveyors of online entertainment say business has never been so good for them.” 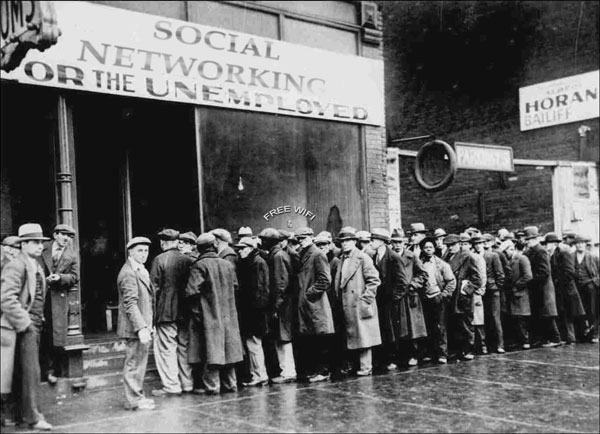 Wingfield and Tam say that the Internet is providing people with a form of “social anesthesia” to distract them from the stress of job loss and a crumbling economy. This is not unlike the roll films played in the 1930s during the Great Depression. Unemployed people at that time would often spend a few pennies to watch movies at local movie houses as a way to cope with the stress of not knowing where their next meal might come from.

Movie tickets are a lot more than a nickel these days, though, and $10 for a couple of hours of entertainment can’t beat the hours of entertainment available virtually for free on the Internet, say experts. There is a precedent for turning to the Internet during tough times. Following the 9/11 terrorist attacks in 2001, for example, there was a surge of Internet traffic, according to Dr. Robert Kraut, social psychology and human computer interaction professor at Carnegie Mellon University, as people turned to web chat rooms and message boards for “sensemaking” and escapism.

Of course, massive growth during tough times is a double edged sword for many online entertainment and social networking destinations. Sites whose business models rely on selling advertising against their traffic, might struggle to sell ads even as their traffic grows. People might be turning to online forms of entertainment more and more as their economic situation becomes more grim, but that means they’re also buying less — which means advertisers will advertise less. Sites that can weather the downturn and keep the lights on until the economy picks up again will benefit from all those new users, however.

Thanks to Kelli Shaver, whom I roped into creating the Internet soup line image for me.

Learn SQL (using MySQL) in One Day and Learn It Well