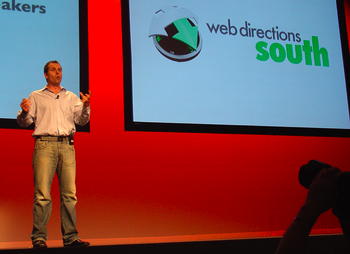 The SitePoint crew was in the 600-strong audience at the opening of Web Directions South 2007 in Sydney today. Conference runner John Allsopp took the stage to open the conference and introduce some of the major themes.

Top of his list was that the mobile web has arrived. John mentioned devices like the Apple iPhone, Nokia’s WebKit-powered mobile browser, and the Nintendo Wii as devices that are changing the way people use the Web. Reflecting these advancements, the conference this year has a special focus on mobile web technology.

Keynote speaker Rashmi Sinha of SlideShare, then stepped up to speak on The Perils of Popularity, focusing on the current trends in social networking. Sinha showed how the new crop of social networking sites are based around shared activities (e.g. Facebook) and objects (e.g. YouTube).

At several points during her talk, Sinha paused to poll the audience about their current focus, and was surprised to find the Sydney audience seemed to have different priorities than audiences she has addressed in Silicon Valley. For example, only a smattering of Web Directions South attendees indicated they were currently developing Facebook applications, whereas stateside it’s apparently “all about Facebook Apps.” 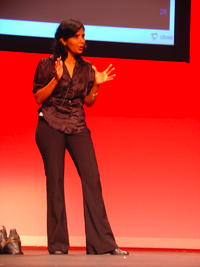 Sinha encouraged attendees to consider the model of sociality they use, and the consequences it will have on the type of “popular” content it will highlight for your users.

Sinha also theorised out that Google is actively working against several of these models of sociality, because closed circles of object sharing within social networks do not translate well into algorithms like Google Pagerank, which can only measure quality of content by gauging popularity on the open Web.