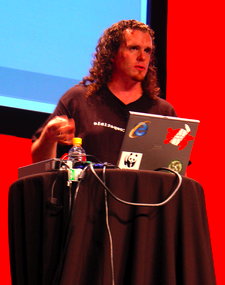 At Web Directions South 2007 in Sydney this week, I caught up with Chris Wilson, the Platform Architect for Internet Explorer at Microsoft. Chris has been building web browsers for as long as there have been web browsers, and it was a pleasure to sit down with him at the end of the final day of the conference.

In his talk at the conference, “Moving the Web Forward”, Chris gave the audience a glimpse into the realities of developing the most popular web browser in the world. With over 500,000,000 users to answer to, the words “Don’t break the Web” have become an overriding mantra for the company in its work to develop the next version of Internet Explorer (currently known as IE.Next).

I took the opportunity to ask Chris a few of the questions that were at the top of my mind following his presentation:

Kevin Yank
“Your team is building a whole new rendering engine for the next version of IE.”
Chris Wilson
“What we’re actually focused on right now is specifically the layout engine part of that. The part that figures out how to lay out text content, borders, etc. on the screen, and be able to manage text flow in general. […] We realised that, you know, ‘Wow—we are Microsoft. There are a lot of people here with layout expertise. There are a lot of people who really know how to do layout right.’ […] We needed to unchain those people, and really allow them to do some really incredible things.”