Over the past 7 years there have been numerous occasions when I have pondered on how sweet life would be if only I got paid to hang out at the SitePoint forums, so it came as no surprise to me that over the last couple of weeks I’ve seen several people post or tweet about how much they’d like to work for SitePoint. One guy even called it his dream. That’s pretty cool. As a result, I thought I’d share my own story.

Several years ago while working as a .NET developer for a large corporate, I stumbled upon the forums after Googling for a code snippet. After an hour I’d caught the SitePoint bug. Hanging out at the forums was about more than just learning. It was about being immersed in an environment full of people with great ideas! People that love code as much as I do! People that know that being a geek is cool! After a year or so of wasting company time on the forums under the guise of learning, the forum staff invited me to join their ranks as a Mentor. For a few years I worked as a volunteer moderator, climbing up the ranks to the role of Team Leader, before I was forced to resign due to time constraints (in the form of twins). 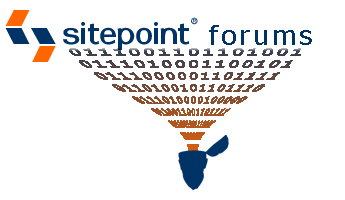 It was hard to leave the place but it’s fair to say that I had plenty to distract me. It was quite a surprise when I got an email from SPHQ 6 months later offering to pay me to come back! I now have the dream job for a stay at home mum. 20 hours a week from home doing something that I love. And I’m finally getting paid to hang out at the forums.

So now I bet you’re wondering how you get into this Mentor gig. Well, it’s simple really. You hang out at the forum and make really great posts. You don’t even have to make lots of them – you just have to think before you hit that New Post button. Rest assured that we’ll notice you. It’s not all roses though, there is a downside – I’m a tyrant of a boss.

I have an ulterior motive for blogging on this topic today – this month I’m all about quality posting and I’ll do whatever it takes to get you to do it. If the idea of working for SitePoint doesn’t do it for you, perhaps some free SitePoint books will.

To change the subject completely, I was over in the office last week and there is a whole lot of excitement brewing over our latest project – JavaScript Live! If learning JavaScript is on your bucket list and you’ve got $9.95 burning a hole in your pocket then you just can’t afford to miss this opportunity. If you’re quick you’ve still got time to take part in our latest Twit-away and score yourself a free ticket.

Hot Topics This Week
In General Chat this week they’re talking about a subject that I’ve always found fascinating – online relationships. I used to think there was something slightly creepy about meeting someone online, but now I have several friends that I wouldn’t have met were it not for the magic of the internet. In fact, my relationship with my colleagues is online for all but 2 days a month.

The talk in Careers and Education is all about time efficiency. How do you get faster and more efficient?

One thing we’ve decided that we need at the SitePoint forums is a dedicated WordPress forum. I’m working on that, but until it happens, if WordPress is your thing, drop in to the Blogging forum and share your best resources for editing WordPress themes.

In the rather excitingly named Perl, Python and Other Languages forum they’re really going over the top with the geeking out and are discussing what language to learn next.

And last up for this week they’re talking shopping carts over in… you guessed it… the eCommerce forum.

So if you haven’t joined the forums already, what on earth are you waiting for?