You’re probably familiar with Windows and/or Mac OS. But they aren't the only operating systems available. A popular alternative is Linux. In this article, Lesley Lutomski introduces Linux and what you need to know to give it a try. I'm constantly surprised by people who tell me they'd like to try Linux, but think it's “too hard”.

There seems to be a common misapprehension that Linux is “for geeks”. Certainly, this was once the case: dedicated users compiled their own kernels, and it wasn't for the faint-hearted.

But Linux has come a long way since those days. So, if you've never tried it, or tried it many years ago and gave up, I'd encourage you to think again.

Linux comes in many “flavors”, or “distributions”—normally referred to as distros. Some of these are aimed firmly at a mainstream audience, and I'd suggest using one of these to get your feet wet. The best known of these is possibly Ubuntu, which is the one I use and the one I'll concentrate on here. Linux Mint is also popular, but there are many more. 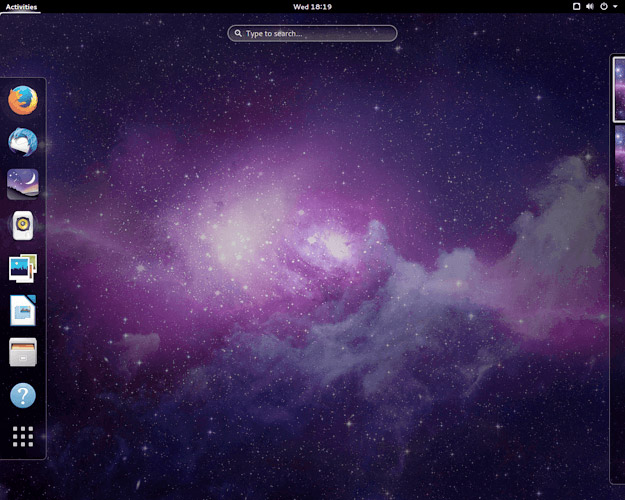 So is it difficult to use? Not in my experience. The first thing I noticed when we switched to Ubuntu was the sudden reduction in the number of distress calls I received from my husband. He seemed to experience fewer problems using the system than he had on Windows XP, and also seemed to feel more confident about trying things for himself, rather than panicking that he might “break something”.

I also set up a Xubuntu system for an elderly friend who had never used a computer of any kind, and she rapidly got to grips with it.

What Are the Benefits?

For many people, cost will be a consideration. Most popular Linux distros—and their associated software—are free to download and use. For others, the open-source nature of the OS appeals.

Linux is also far less susceptible to viruses than Windows. The main reason for this is simply that most viruses are designed to target Windows machines and will have no effect on a Linux system. It's not true that Linux systems are immune to viruses, but they are very rare. A humorous explanation can be found here.

This added security is one reason we chose it for our elderly friend. Although Linux viruses are rare, ClamAV is free and helps ensure you don't inadvertently download and pass on viruses to friends with Windows. 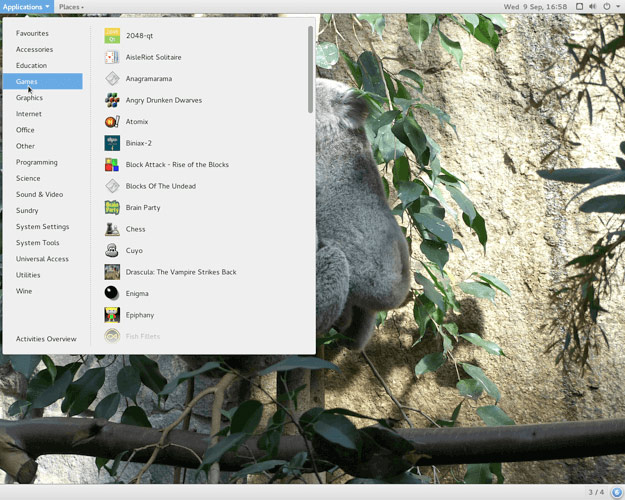 Will Linux Be Compatible with My Hardware?

Linux will run well on most PCs, although if you have the very latest cutting-edge technology, you may find it's not immediately supported.

On the other hand, installing Linux can be a great way to breathe new life into old hardware. Some distros are designed to be lightweight—such as the Ubuntu variant Xubuntu—and will perform well on systems with limited resources.

It's also possible to run Linux on a Mac, although I have no experience of this. The Ubuntu Forums—a great source of help and support—have a dedicated section for Apple hardware users.

How to Choose a Distro?

The easiest way is simply to try one and see if you like it. This isn't nearly as radical as it sounds.

Many distros are free to download, after which you can burn them to DVD. They can then be run as a “live” CD/DVD. In other words, you boot your system from the DVD—or a USB drive—and run the OS from there. It doesn't have to be installed, and nothing is written to your hard drive—although you should be able to access files on your hard drive while in Linux.

This is a great way to get a feel for the distro at no risk, and it also lets you check there are no problems with your hardware. The Ubuntu site provides very clear tutorials for getting all this done.

A word of caution, though; running from a live DVD is noticeably slower than running from a hard drive, so you should make allowances for this. Also, should you decide to stick with Linux, you may find extra proprietary drivers to improve the performance of graphics and other hardware.

How Do I Install It?

Again, this is a simple process. The “live” CD/DVD includes options to install the system, should you choose to do so, and will walk you through the process.

You can choose to install alongside another OS—either on the same drive or a separate drive—and run a dual-boot system. This allows you to use either system. You can also run it in a VM.

If you decide to install Ubuntu or its variants, either as a dual-boot or standalone system, the process is as simple as answering a few questions and then sitting back while the system does the work. If you're installing alongside an existing OS on the same drive, Ubuntu will take care of partitioning it. If you have a broadband connection, you can choose to download and install updates as part of the process.

Be warned that Linux uses a different file system to Windows. While Linux will be able to read and write to a Windows partition, Windows won’t read the Linux partition. If you’re dual-booting and need to access files from both systems, ensure you save them to a partition formatted as FAT or NTFS.

My own experience of this as a first-time Linux user was not quite straightforward. I added a second hard drive for Ubuntu and the installation went smoothly. Afterwards, I booted into Ubuntu and everything was great—until I tried to boot WinXP and found I couldn't.

After a brief panic, I headed off to the Ubuntu Forums, where somebody patiently walked me through a couple of possible solutions until we found one which worked for my system. That was seven years ago, and the only time I had an issue like that.

What About Other Software?

This is probably the ultimate determinant of whether or not Linux is for you. On the one hand, you have access to a great deal of free, easy-to-install software; on the other, many popular commercial applications are not available for Linux.

You can, of course, run a VM, or an alternative is to use Wine, which is a kind of translation layer for Windows software. The Wine website maintains an Application Database that gives guidance on how well each application runs under Wine. Often this can vary greatly, depending on the version of the software, as in these results for Photoshop: I've had good success with old games and smaller apps, but generally speaking, I use native Linux alternatives.

LibreOffice (a fork of OpenOffice) comes installed as standard, as does Firefox. Chromium is the native Linux version of the Chrome browser and supports many of the same extensions. GIMP is a near replacement for Photoshop, although opinions vary on how well it compares. In addition to the bundled applications, other software is easy to install from the repositories.

Ubuntu now comes with the Ubuntu Software Centre, which is a graphical interface that lets you find software by category and see ratings: 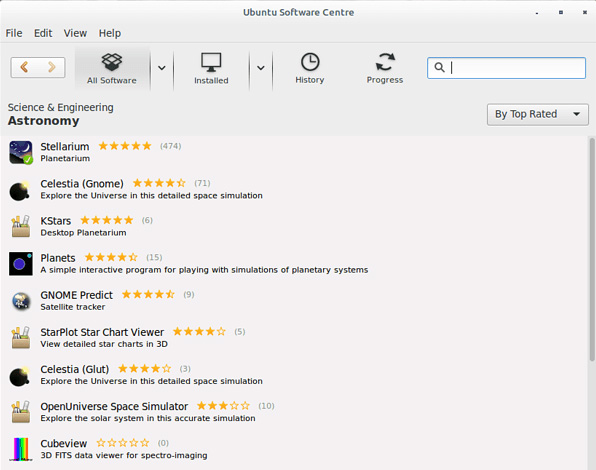 I tend to prefer the older Synaptic Package Manager. You can search for an application by name or keyword, and look through suggested results: 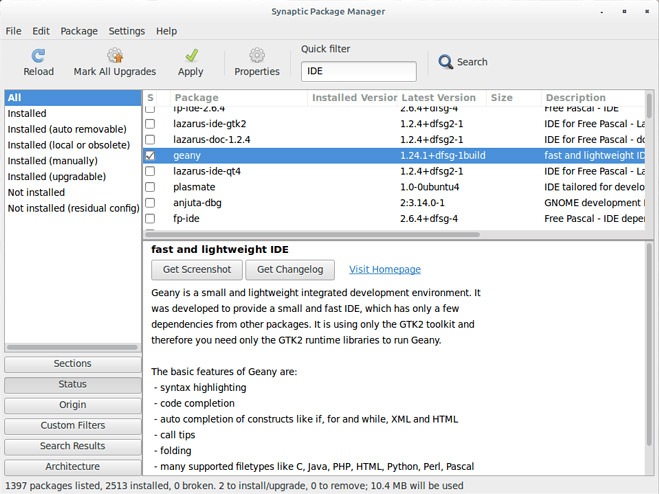 Updates are notified automatically and installed with a single click. It's rare to have to restart the system, except for updates to the kernel itself: New releases of Ubuntu are made every six months, but you can opt to use a “Long Term Support” (LTS) version. These are released every two years. Installed applications will receive updates, but will generally not upgrade to a newer version until the next Ubuntu release. So if you like to run the latest version of things, the LTS version won't be for you.

So What Are You Waiting For?

This was never intended as a “how to” guide, but just as an overview to whet your appetite and encourage you to try Linux for yourself. Hopefully I've succeeded, and you're now off to download your very first distro!

If you'd rather dip your toe in an even gentler way, without even burning and booting from a DVD, the Ubuntu site offers a virtual tour of the operating system that you might enjoy. It gives you a taste of the look and feel of Ubuntu, including a glimpse of the main apps that come with it.

Lastly, if you’ve already taken the plunge and installed Linux, and you’re a web developer, here’s some advice on setting up a development environment in Linux.

If you have any questions or experiences to share, please do so in the comments.

Lesley lives on a scenic island off the west coast of Scotland, where she enjoys creative activities from web design to knitting and tatting. She also enjoys teaching and sharing these skills. Her alter ego has been active on the SitePoint forums since 2011.