Recently, I had to work on a website heavily using tilted angles as part of its design guidelines. By “tilted angles”, I mean these sections whose top or bottom edge is not completely horizontal and rather a bit inclined. 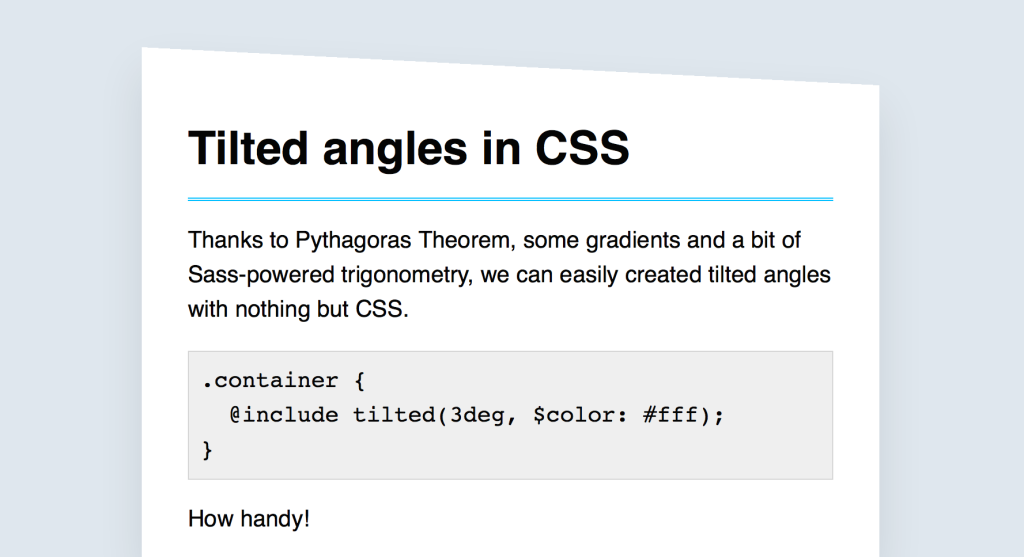 There are quite a few ways to implement this. You could have base 64 encoded images applied as a background, but it makes it hard to customise (color, angle, etc.).

Another way would be to skew and/or rotate an absolutely positioned pseudo-element, but if there is one thing I don’t want to deal with, it’s the skew transform. God, no.

When using Sass, you could use the Angled Edges library that encodes dynamically generated SVG. It works super well, however it requires a fixed width and height expressed in pixels, which kind of bothered me.

I also really wanted to see if and how I could be able to implement this. I ended up with a solution that I am really proud of, even if it might be a bit over-engineered for simple scenarios.

My idea was to apply a half transparent, half solid gradient to an absolutely-positioned pseudo-element. The angle of the gradient defines the tilt angle.

This is packaged in a mixin that applies the background color to the container, and generates a pseudo-element with the correct gradient based on the given angle. Simple enough. You’d use it like this:

The main problem I faced with this was to figure which height the pseudo-element should have. At first, I made it an argument of the mixin, but I ended up going trial-and-error at every new angle to figure out what would be the best height for the pseudo. Not ideal.

And just when I was about to table flip the whole thing, I decided to leave the laptop away, took a pen and paper and started doodling to figure out the formula behind it. It took me a while (and a few Google searches) to remember trigonometry I learnt in high-school, but eventually I made it.

To avoid having to guess or come up with good approximations, the height of the pseudo-element is computed from the given angle. This is, of course, all done with a bit of Sass and a lot of geometry. Let’s go.

Trust me when I’m telling you it won’t be too hard. The first thing we know is that we have a full-width pseudo-element. The gradient line will literally be the pseudo’s diagonal, so we end up with a rectangle triangle.

Let’s name it ABC, where C is the right angle, B is the known angle ($angle argument) and A is therefore C - B. As shown on this diagram, we try to figure out what b is.

From there, we have to use Pythagoras theorem:

The square of the hypotenuse (the side opposite the right angle) is equal to the sum of the squares of the other two sides.

That’s it. We can now build a small Sass function computing the height of the pseudo-element based on a given angle.

Note: the pow(), sqrt() and sin() functions can either come from Sassy-Math, Compass or custom sources.

We’ve done the hardest part, trust me! The last thing to do is build the actual tilted() mixin. It accepts an angle and a color as argument and generates a pseudo-element.

A few things to note here: the mixin applies position: relative to the container to define a position context for the pseudo-element. When using this mixin on absolute or fixed elements, it might be worth considering removing this declaration from the mixin.

The mixin applies the background color to the container itself as well as pseudo’s gradient, as they have to be synced anyway.

Finally, the pseudo-element’s height has to be conveyed through padding-top (or padding-bottom for that matter) instead of height. Since the height is expressed in percentages based on the parent’s width, we cannot rely on height (as it computes from the parent’s height).

For this article, I’ve chosen to go with a simple version of the mixin, which might lack flexibility and could, in theory, present the following problems:

Also, my existing version uses Sass-based math functions as it was in a Jekyll project, not allowing me to extend the Sass layer. If using node-sass, you could easily pass these functions from JavaScript to Sass through Eyeglass or Sassport, which would be definitely much better.

I hope you liked it! If you can think of anything to improve it, please feel free to share in the comments. :)

See the Pen Tilted Angles in CSS by SitePoint (@SitePoint) on CodePen.