The designer’s toolset seems to be always expanding. Long gone are the days when a web designer can rely solely on an HTML editor and Photoshop. Now, especially when working in a team with developers, you need to work smarter and more collaboratively.

In this post, I’m going to discuss using Git.

Git is version-control software, originally created by Linus Torvalds (the creator of Linux). It’s main purpose is to track changes to files, so that you can better manage your work.

Because Git is fantastic.

In essence, it keeps track of all the changes to your files in a project, so if you break something, Git will be there to help you get back on track. Its powerful tools let you view your changes, helping you fix your code so that it’s free of a certain bug, or see exactly who broke your precious code.

It does, however, have a mantra among its users: Git will do exactly what you say, but not always exactly what you mean. So in this article, I’ll cover both the right way to use it, as well as common pitfalls that would otherwise cause you problems.

Most source control systems (Git included) use the concept of a tree to describe a repository. A repository is a collection of files and directories (your project), as well as a list of changes to those files over the life of the repository.

The master branch, sometimes referred to as “the trunk,” is the current state of the files in your project. You can create additional branches from the master branch, depending on your needs, or the way you work.

When working with Git, you’ll need to know these terms:

To start using Git, you have to install it. Head to http://git-scm.com/download to find installers for your operating system.

[Caveat: I’m a Mac guy. That means the command line is a little different for you Windows users, but the Git commands are mostly the same.]

git init steps up a blank repository. It will return Initialized empty Git repository in /Users//sitepointexample/.git/ letting you know your repo is ready to use.

It’s quite common to have a remote master. A remote master is a copy of the repository (usually on a server that’s accessible by all the development members of your team) that you can push or pull changes from/to.

I’ll skip going into this in any depth; there are many resources on the Internet that will explain this in more detail.

There are six basic actions you can do with Git. This is by no means all you can do, but in your day-to-day tasks these are the six that you’ll use most often, in this order (apart from merge, which you’ll use less than the other five). Most likely, you’ll learn these by rote; you will definitely use them a lot!

git status shows you everything you need to know about the state of your repository. It shows which branch you’re working on, what files have been changed since they were last committed, and which files Git knows nothing about. It will indicate if files have been moved or deleted, or if there are merges that need to be made manually.

Below are three commands: a git status telling me I’ve not committed anything yet; I’ve created (or touched) an empty file called README; and I’ve done another git status, telling me I have an untracked file (called README):

git status is the first command to use. Do it before you do anything else, every time.

So I’ve added the README file, and another git status tells me that when I commit, Git will commit the changes to that file.

In case you’ve added changes in error, you can undo the changes by running git reset HEAD <filename>, which tells the repository not to do anything with the changes. It will not drop any changes you’ve made; it just won’t commit them.

git commit saves the changes to the repository. A commit gives you a commit identifier, a long string of characters (an MD5 hash) that the repository uses to name the point in time the commit was made. These are what you can use in the unfortunate event that you need to roll back to a previous point in time:

I’ve committed the changes to the file with the --message 'My First Commit'. These are handy hints you can write when you’re checking through the commit log looking for a certain change you made. Make these as descriptive as you can. They save you lots of time when something goes wrong. You can also use -m 'MESSAGE' instead of --message 'MESSAGE' as a short form, saving you time.

git pull pulls in changes other members of your team have made. For this example, I don’t have other team members using the repository (the whole repository is on my machine), but when you do, it will look like this:

git merge is used when you have two branches, and you want to take the changes from one and add them to the other branch.

Usually, you’ll have changes on a feature branch and, when you’re happy with the work, you’ll merge the changes in the master: 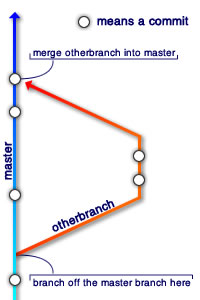 git push will push your changes to the remote server, sharing them with your team. When they next git pull, they’ll see your changes.

It would be used, for example, when you want to push just a single feature branch, so that a team member can also see the changes you’ve made to ‘otherbranch’, and you’d use git push origin otherbranch.

And they are the basics of Git. It is, however, a complex beast. There are many, many more commands—some are really helpful, while others are a little dangerous. You can pick out a single commit and merge it into your branch, ignoring all commits after it. You can use Git to find the exact commit where your code was broken. You can roll back to an individual commit you made earlier in the day, the day before, three weeks earlier, or any time along the repository’s timeline.

As the designer’s toolkit expands, we need to take advantage of handy workflow tools that make the most of our day. Use Git, and never lose all your changes again.

PHP and MySQL on Windows Azure: Starting with GitBruno Skvorc