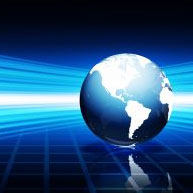 At the heart of the debate over net neutrality is the contention by ISPs that network usage is growing at such a staggering rate due to streaming video, online gaming, rich Internet apps, and P2P traffic like BitTorrent that their networks can’t possibly handle it. To hear the ISPs tell it, the impending exaflood will bring the Internet as we know it crashing down around us by 2010 unless we do something to stop it. Like, maybe, bandwidth throttling or pay per usage web access.

There’s just one problem with the theory: that exaflood, at least in the US where broadband carriers are perhaps most vehement about pushing for the right to control user web access, doesn’t look like it’s on its way. Cogent Communications recently reported that web traffic declined in the second quarter this year by 1%. A large part of that, says Cogent, is due to a usual summer slowdown when school lets out in the US, but this is still the first time that the company has seen traffic decline for an entire quarter.

Cogent’s CEO called out competitors for not being truthful in acknowledging traffic declines.

“The Internet will continue to grow, but it is in a period of transition,” [Cogent CEO Dave] Schaeffer said, adding that he believes some of Cogent’s competitors have not been “forthright” in acknowledging this widespread traffic deceleration in their anecdotal comments on the subject. — Telephony Online

That deceleration has been going on for 5 years, according to Dr. Andrew Odlyzko of the University of Minnesota, an expert on Internet traffic patterns in the US. “Traffic growth has been slowing down” over the past 5 years, Odlyzko told Ars Technica in April. In the late 90s web traffic growth was doubling each year, but in largely saturated Western markets, that growth has slowed substantially and now hovers at 50-60% each year, which is a rate that the current level of capital investment can support.

Of course, we’ve been hearing about the impending collapse of the web year after year, and it hasn’t happened yet. Here’s what Qwest CTO Pieter Poll admitted in 2006: “”I found that the traffic is well under what some in that industry say is happening. I mean, you hear claims of significant double-digit penetration of peer-to-peer traffic, and it was not near there.” (link)