FileRide is a startup social platform that runs on the user’s desktop. The Stockholm based development essentially creates a social network around files already on your computer, and with items you save from the cloud. In a very real way, FileRide is the reverse of cloud computing in that users do not file “share”, but file (interest) interact. As an example, two FileRide users have the same photograph stored on their PC, using the platform these users can now IM about, form groups around or comment on thier stored data. The reader might think of this as a sort of “super secure”, and fast social aggregator, with integrated instant messaging.

FileRide is an aesthetically beautiful development, and the user interface is superbly well thought out and logical. Aesthetics are so often overlooked in favor of utility or vice versa in developments. Such is not the case with FileRide, as the site illustrates how graphic design and function can go hand in hand. I had a long FileRide IM chat with founder Patrik Hedmalm today, as he helped me through some of the features. He led me around one of the most unique developments I have seen in some time. 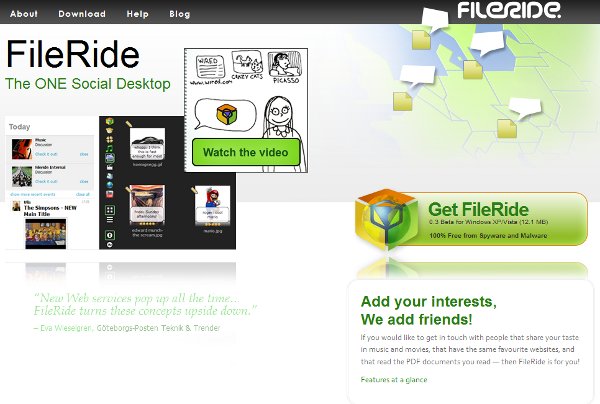 The FileRide client is built on top of the Qt (Trolltech/Nokia) framework. This configuration allows for engaging Windows, Mac and Linux users with a minimum of effort. Though FileRide is only currently available for Windows XP and Vista, and OS X, with mobile versions already in development. Patrik further applauded their decision on the current framework, saying; “It has also proven to be a great decision with regards to support, interface design, productivity and structure.” On the server end, FileRide is implemented in clean object oriented PHP, which according to Patrik, provides well supported scalability and stability. As for the striking design, Partik told me he did most of it himself, while Klokie Grossfeld helped in designing the Web interface. 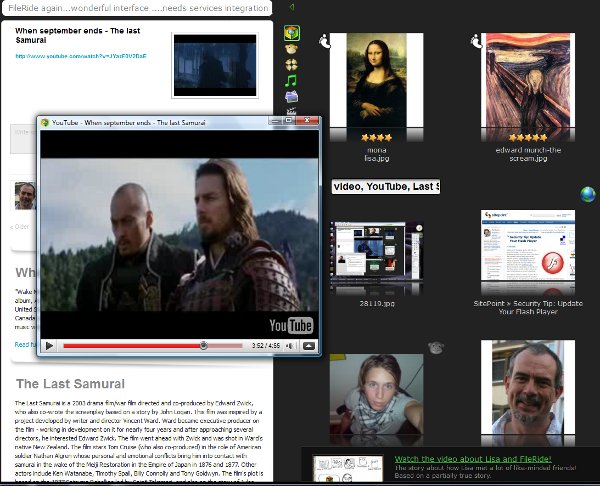 Like so many deep applications, FileRide is neither simple to describe, nor are the features easily listed. The interface is fairly redundant with top and middle nav elements. From profile creation and customization to instant messaging, there is not a lot that has been left out even at this early stage. The short list (there is a huge version) of user features is as follows:

Besides the hundreds of feature aspects already resident with the FileRide platform, there are several very interesting subtle ones. First, FileRide runs in the background, and notes every time a user copies a Url, file or image, then a notifier asks if the user wants to send it to FileRide. Users can drag and drop MP3’s and other docs to their desktop in FileRide for categorization etc. Finally, as in the image below, a user can add an image, see contextual links to blog posts about the item, chat in real time about the item, comment on it, microblog about it, and perform a whole range of other functions at once. Though not fully refined, this UI has a very powerful potential. It is however, sorry to say, something you have to see and use in order to get the experience. Apple logo expanded via slider bar, contextually linked to blog references, commented on via micro blog, and chatted about via IM.

Any number of aspects make FileRide a unique development, but real time discussion sets it apart. Social bookmarking and aggregation services have needed this kind of real time collaborative all the while. As for security and speed of operation, the nature of my little quad core “walled garden” virtually ensures this user’s safety and quickness. In the screen below, I have tried to show how YouTube videos are shared and discussed. The green dot below some of the videos, indicate the user’s online status, while comment and share options appear respectively. 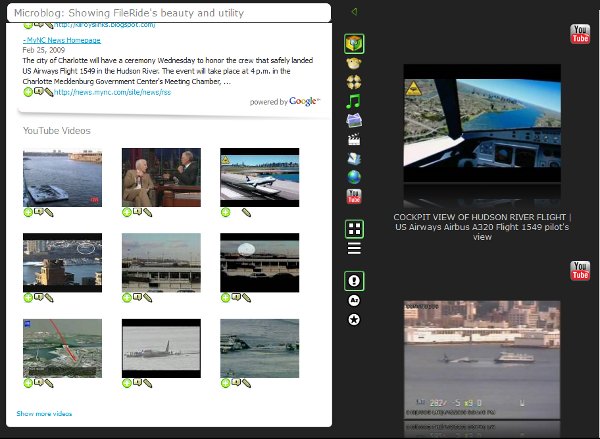 FileRide has been covered elsewhere, but only superficially. Even this rather in depth post cannot do the current platform or its potential justice. The Mac version along with iPhone and a lite Web access are upcoming, as well as a rather vast number of UI improvements. As for negatives, there are a few refinements that need to be added. The notification tool needs more function, organization of files is not superb and beyond tagging there needs to be object oriented classification. More services are on the way according to Patrik, but currently YouTube, Twitter, and Wikipedia are the only ones supported.

Part of the novelty of FileRide for some may be in its socialization method. This aspect is quite extraordinary in that the philosophy is reversed. Rather than friends sharing links and other data, common interests lead to friendly interaction and finding friends on via a user’s stored interests. For me however, the design excellence, philosophy and attention to detail in the development, add up to a first class development. 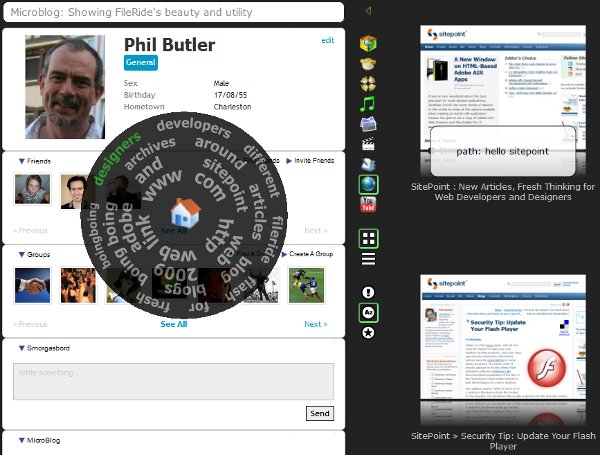