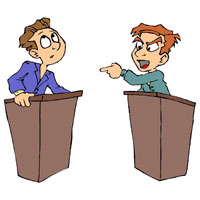 Anyone who has been around SitePoint the past 5 or 6 years is likely well acquainted with the debate over the merits of spec work in the graphic design field — work done by graphic designers without the guarantee of pay. SitePoint is squarely in the middle of the spec work debate due to spin-off site 99designs, which is the web’s largest graphic design contest marketplaces, and a frequent target of the vocal ‘no-spec’ community. This morning at the South by Southwest Interactive festival in Austin, Texas, the debate came to a head at a panel session titled “Is Spec Work Evil? The Online Creative Community Speaks.”

Unfortunately, I missed the panel — instead I was attending a film festival panel (film being an industry in which one of the most popular paths of entry is via spec work). I followed the spec session via Twitter, where the debate was very intense, and via a great write up on Rebecca Caroe’s blog. Even though I didn’t attend the panel, I have some opinions on spec work that I wanted to share here.

A few disclaimers before I begin. First, I am no longer employed by SitePoint, and am not being compensated for this post. Second, I used to co-own a graphic design contest site that competed with 99designs (actually, it was before 99designs was spun out of SitePoint’s Marketplace), but I sold that site two years ago. Third, I have been around SitePoint since 2003, first as a member and moderator of the forums, and then an employee, and as such I was around for the impetus of the graphic design contest concept and have watched it grow first hand.

The argument against spec work generally goes something like this: spec work is unprofessional, leads to low quality results, poor (or non-existent) client/designer relationships, and devalues the entire process. There’s a good overview of the general argument over at no-spec.com. In theory, these arguments make a lot of sense, but in practice, I don’t really see it playing out.

Spec work may be dominated by amateur designers (though I’m not quite so sure), but the talent level is high. A quick perusal of the contests currently running at 99designs reveals entries that range from bad to good to great. Certainly there is at times a high noise to signal ratio due to the fact that design contests are open and anyone can enter, but there is definitely high quality, very professional work being done.

Further, I know many talented designers and not one of them who is actively promoting their availability is hurting for work. In fact, many designers I know have a bigger workload than they can handle and have had to turn away projects — even in this economy. Nor has anyone I know needed to lower their rates to compete with sites like 99designs — some of my friends have actually raised their rates over the past year as their workloads increased. So if designers participating in spec-based design contests or doing other types of spec work isn’t hurting those that don’t, where’s the beef? The market is clearly big enough to support both approaches.

That said, I know a good number of designers participating on contests sites that report to me the following:

Like almost any argument, this one isn’t black and white. Spec work isn’t right for all designers and all situations — and I don’t think anyone would argue that. However, the market exists and clearly serves a purpose for both the consumers and the creators.

Many of the consumers using design contest sites or other spec work marketplaces are either new to the design process, and thus don’t have the skills necessary to judge a designer on their portfolio alone, or, they don’t have the budget for a traditional design shop or high priced, established designer. If the former is true, that customer might develop those skills after going through the fairly rigorous and time consuming process of evaluating and leaving feedback of tens or hundreds of entries. Then the next time around, that client might opt to hire a designer directly (which, given the cost of a person’s time time, might for some people actually be a cheaper option). If the latter is the case, then it’s really not a lost client. Budget constraints are absolute, so that customer isn’t choosing a site like 99designs over other options, he or she is choosing 99designs because it’s the only viable option.

Design contest sites are not the future of graphic design. There will never be a day in which all design work is conducted via contest — in fact, I’d wager that the vast majority of design work will always be done via traditional means. There are plenty of situations in which a design contest is not the right way to go. Maybe you have the perfect designer already in mind, maybe you don’t have the time to run a contest, maybe you need to exercise more discretion during the design process, etc. However, design contests and other forms of spec work are certainly a part of the future of design, and in my opinion, that’s really not a bad thing.

What are your thoughts on spec work and design contest sites? Please share in the comments below. We know this is a contentious issue, but please try to keep things civil and on topic.