(Read coverage of day one, day two and day three of the SXSW festival.)

And so the mother of all festivals comes to a close. Here are some highlights from the final day:

This brings to a close our coverage of the SXSW Interactive Festival 2007. 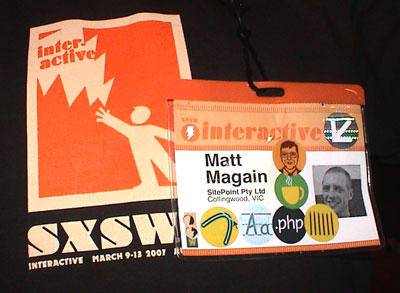 We board the 16 hour flight home with our hearts buzzing with new ideas, our heads throbbing from lack of sleep, and our livers having taken an absolute pounding. If you’ve read this far, enjoyed what you’ve read, and work on the Web but have never been to SXSW, then I urge you — implore you — to try and make the pilgrimage at least one time in your life. Scrape, save, borrow, beg. Whatever it takes.

This is without a doubt the event that you should try and get to — not even for the panels (I enjoyed a great deal of what I saw, but some of it was definitely average) but for the networking opportunities. Nowhere else will you have so many opportunities to pick the brains of and share a pint with the thinkers and the doers of the Web. The relationships you build at events like these are not only rewarding, they can be invaluable.

Go on — you won’t be disappointed. I’ll see you there.