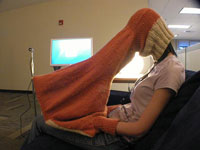 One of my predictions for last year was that privacy would be a growing concern among mainstream users. I didn’t repeat that prediction this year, but perhaps I should have. The reason? Apparently, younger web users seem to care more about privacy controls. Or at least, they use them more.

According to Facebook chief privacy officer Chris Kelly, more teenagers than adults use privacy controls on the social network, at a rate of 60% to about 25-30%. That’s surprising given the conventional wisdom that younger Internet users tend not to care about the privacy of their data.

A recent study from Computer Associates confirms that many teens are at least somewhat concerned with online privacy. That study showed that 79% of teens aged 13-17 who are members of a social networking site like MySpace or Facebook protect their profiles from the general Internet in some way (i.e., only allow friends or friends of friends to view their information).

Profiles on Facebook, of course, are automatically protected from viewing by the Internet at large, but protecting them from the rest of your network requires additional steps. That teens are more likely to utilize Facebook’s granular privacy controls points to one of two things that lead to the same conclusion:

If I had to put money on one potential reason for why younger Facebook users are more apt to utilize privacy controls than older users, I’d guess the latter is more likely. Facebook’s privacy controls are not very well publicized and hidden inside multiple menus. Younger users, who might tend to be more web savvy, could just be finding it easier to locate privacy controls. The previously mentioned Computer Associates survey also found that young people are very likely to post pictures of themselves online, which could be another reason why they are more likely to seek out and use granular privacy controls — they have more to keep hidden.

The conclusion that can be drawn from this, regardless of the reasons, is that privacy and privacy controls will be a growing issue in the future. Younger web users will begin to expect that web sites include increasingly more powerful privacy controls that allow them to more completely regulate how the information they post online is shared with the rest of the world.

Specifically for Facebook, that statistic might also be encouraging for any plans to make a run at the business networking crowd. Because Facebook is used by teenagers and young adults to share messages and pictures with friends — i.e., often times things you’d not want shared with your professional network — the site would need rock solid, easy to implement, and very granular privacy controls before it could be used in earnest for any type of business networking. That so many younger users (future members of the working class) are already using such controls is good news for Facebook.