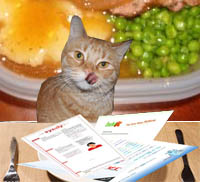 Testing new web apps can be akin to dining on an exquisite feast … but then there are “the leftovers”.

This week’s diet of developmental porridge has left a few morsels awaiting their fate in the cooler. As anyone knows, leftovers basically fall into three categories — anticipated delights, possibly consumable, and only fit for the neighbor’s cat. Here are four early startups, which either left a bad taste, might be tastier later or should be mixed with some Friskies.

syndy is a “not so cute” feed aggregation/notification widget for the desktop. Ostensibly designed as a personal assistant to keep the user (or boyfriend, I am still not sure) up to date on over 100 news feeds, syndy is simply primitive by comparison to a host of better applications (I like Alert Bear myself).

The widget does do the job, but chances are that the folks you’re notifying have already been notified directly by their own favorite destination or by a better app.

Decision: syndy smelled fishy from the start, and old Felix next door is meowing. 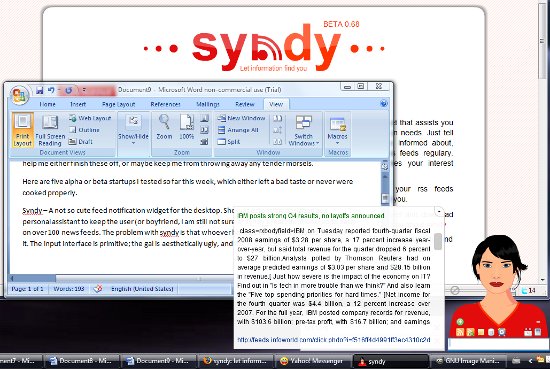 syndy as I write this.

fachak is billed as “the one stop platform”. This invitation-only alpha acts as a social aggregator, allowing users to pull in their Flickr, YouTube and other various online contributions, all managed using a fairly nice interface.

Unfortunately, discoverability and navigation are pretty bad right now, as the home and profile pages look just like a YouTube menu. However deeper features appear to be much more highly developed, as illustrated in the screenshot below. From docs to video, images and more, the developers are obviously building this from the back end of features forward.

All-in-one developments like fachak have been a pet project of mine for some time. The obvious weakness of fachak’s version can already be seen in that no “perfect” interface has ever been designed to allow users to organize, access, share and manipulate massive and diverse content collections. This development is one to watch however, as the designers may have a perfect solution dashboard in mind — it is only an alpha after all.

Decision: A tasty morsel for later on, but may not keep long. 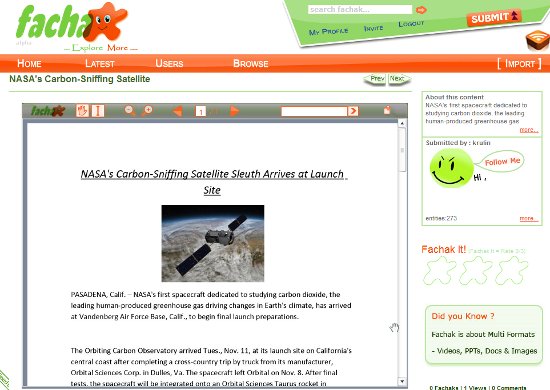 UI and Nav for Docs and other media is versatile.

twopular is a transparent alpha in process, billed as a “Twitter trends aggregator.” Aside from having a very cute mascot and being the hurried work of a midnight coder, even the creator admits this development is a “what if” proposition (and I quote, “Please consider enjoying what you see right now and don’t miss to come back occasionally to check if we have found out what this is for.”)

I was ready to throw this one directly out the window hoping to hit ole’ Felix between the eyes, until curiosity got the best of me. Anything Twitter-related tends to make me ill these days, but on investigating other apps by this developer (you will love playing with this), Martin Dudek, it became obvious that the fellow is quite brilliant.

I came to learn after Twitter first launched that just because I saw no value doesn’t mean that others won’t — in fact, the crowd often shows a never ending capacity to consume the ridiculous. So, given this paradox, twopular will likely evolve to become the leading trend analysis tool of the sales and marketing world … or not. 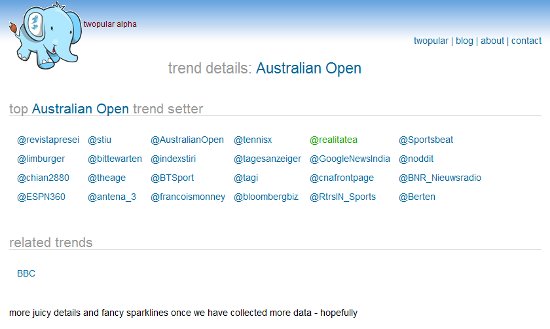 smirk is an alpha development that allows users to generate animated avatars reflecting their mood. The concept is actually pretty cool, and some of the samples quite funny. I did actually try to test this app, only every step I followed — from signup to visiting a supportive site called Crusher — was circuitous and full of dead ends. I assume that embedded JavaScript some kind of player interface form part of the service, but believe me the road map to understanding this application is written in “Geek Greek”, for sure.

Decision: Immediate appetizer for kitty next door if any casual visitor chomps down on this frustrating little varmint. 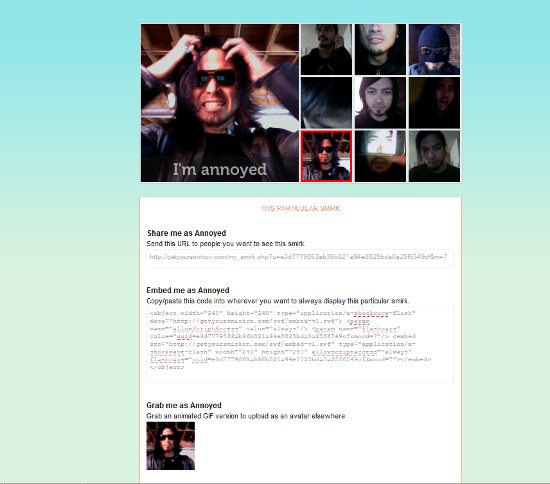 I am annoyed too!

Now that the ice box is reorganized and at least one stale leftover is tossed, I’m off to shop for more startup treats. For a heads up, I saw an interesting item in the deli section called Twitblogs yesterday. I’ll be talking with these developers on Monday for new developments on this startup.

As for these latest leftovers, we’ll revisit them as merit and progress warrant. As for smirk, if they are lucky the cat will be finicky and maybe they can correct their discoverability issues.

How Do You Keep Up?Kyle Vermeulen

Throw Your Prospect a Bone, Not the Entire MealJohn Tabita